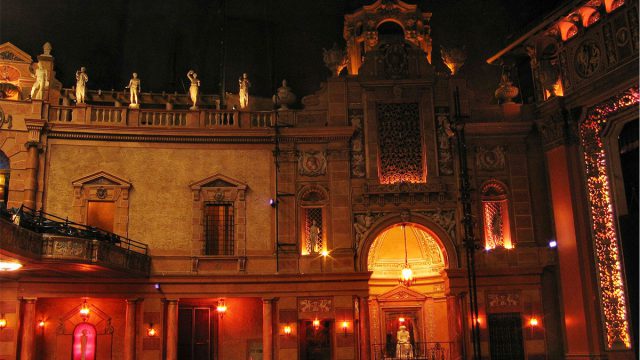 The Saenger Theatre, a dynamic site for local media production and dissemination, both witnessed and mediated the rise and fall of several different genres, including vaudeville, jazz and orchestral music, and motion pictures in its first decades on Canal Street. This theater also helped to usher in the age of sound films as a host to several citywide premieres of various stages of talking and motion pictures.

In 1921, when the Saenger company purchased the space on Canal where the Saenger would be built, their transaction meant the “metamorphosis of an entire block.” [1] Julian H. and A.D. Saenger purchased the area bordered by Canal, Rampart, Iberville and Basin Streets for $250,000 with plans to erect a lavish million-dollar theater that, according to the Times Picayune, would “hasten the beautification and illumination plans that will make Canal Street one of the most brilliant of the nation’s showplaces.” [2] One of the agreements in this realty transaction was to conform the neighboring stores on the block to mirror the architecture of the new theater. [3]

Canal Street entrance under construction, about 1925. The sign above the entrance indicates that the theatre would open in fall of 1925, but that wouldn’t occur until 1927. Only the facade & arcade are in progress here, work has not yet begun on the auditorium. The buildings in the next block can be seen through the entrance.
The Saenger Theater, located at 142 N Rampart Street in New Orleans, LA, [4] opened its doors February 5, 1927. [5] The venue began as a silent movie house, with a ticket box office and main entrance at 1111 Canal Street. [6]
In the entrance is a sign advertising the run of Elinor Glyn’s “Three Weeks” with Aileen Pringle & Conrad Nagel at Saenger’s Strand in New Orleans.

A staple of the early days of the Saenger Theater was the between-show recital on the Mammoth Theater Organ. Now a lost-art, the management of the Saenger Theater attempted to reintroduce this form of entertainment to a new generation of movie patrons in 1960. By 1960 the organ, organ players, and performed music in general hadn’t accompanied film in the Saenger Theater for some 20 years. [7]
The organ at Saenger Theater, built by the Robert Morton Organ Company, was initially hailed as one of the outstanding facilities of the building, but the advent of the soundtrack ended the career of the instrument.5 A Times-Picayune article in 1960 noted that the Organ initially accompanied silent movie pictures with mood cues such as “mysterioso,” “hurry,” “love scene,” and “gallop.” A theater organist, Bob Mack, noted how the organ could “imitate with uncanny accuracy the songs of birds, the roar of jungle beasts, the lowing of cows, the barking of dogs, the mewing of cats and the howls of wolves. Also, it can honk at you like an auto horn with such realism that the patron will imagine himself in the heart of New Orleans traffic.” [8]

When the Saenger opened its doors in 1927, its competition for vaudeville acts with the Keith-Orpheum and Loew circuits, which supplied the Orpheum, Palace, Crescent and Loew’s State theaters, ran high. [11] The New Saenger and Publix chain, which supplied vaudeville to the Strand, Liberty and Saenger theaters, struggled with offering a comparable quality and variety of entertainment to their audiences. [12] The Saenger management was aware of this inferiority and moved quickly instead to install sound and capitalize on the growing motion picture enterprise. [13] By June 1933, the Saenger has discontinued vaudeville entirely and offered only first rate sound films distributed by Paramount Pictures. [14]

The Saenger introduced “Movietone,” an adaptation of talking picture principles for the newsreel, to the city on July 28, 1928. On September 1, 1928, the Saenger hosted the first all-talking picture—the photodrama Lights of New York—in which every word is spoken with no subtitles. [15] On that same day, musicians, stagehands, bill posters, engineers and motion picture operators at the Saenger and other theaters across the city went on strike until a new agreement between the Federated Theatrical Employees and the Associated Theatrical Managers had been reached. [16] The Saenger was expected to replace its usual vaudeville program with sound and motion pictures accordingly, as other theaters had done also. [17]
Just two years after its opening, the Saenger was sold to the Paramount-Publix chain for more than $10 million, [18] thus sealing its status as a movie palace in the Depression era—the golden age for New Orleans theaters. [19]

In February 1964 the Saenger made plans to convert the real estate into two separate movie auditoriums, or what’s known as a piggyback theater. [20] The upstairs portion of the theater would seat from 800 to 900 customers, with the seating below remaining at 1,900. The manager at the time, Walter Guarino, expected to convert the lesser area for road-show attractions, extended-run films, or as he put it, “whatever the product is.” [21] By June of that year, there were already ads in Times Picayune for the new usherettes needed for the Saenger-Orleans, the additional movie house made part of the Saenger.
The ad read, “It won’t hurt to be pretty if you’re a girl 18 to 30 years old, 5 feet 2 to 5 feet 7 inches tall, and want to work at the new Saenger-Orleans Theater. Apply to 1111 Canal in person only between 3 and 5 p.m. and you may be able to work as an usherette, concession attendant with all that popcorn, or cashier to handle reserved seat tickets.” [22]
The addition of another screen, the piggyback theater, was in an effort to catch up with the times. By the 1960s, the Saenger was a classic version of the movie house, already vintage in the eyes of movie houses with multiple auditoriums and a selection of movies as opposed to just one at a time. The renovation, in the eyes of many locals, was viewed with distain. A journalist with the New Orleans States-Item, Thomas Griffen, wrote with some anger at the removal of the beautiful statuary on the 2nd floor foyer of the Saenger, in preparation of the Saenger-Orleans. [23]

Curiously, there was an attempt made in 1960 to preserve the history of the Saenger Theater. Manager Walter Guarino issued a public request in the New Orleans States-Item, soliciting the help of locals to piece together the history of the Saenger Theater. [24] Guarino requested photographs, programs, brochures, and newspaper clippings about the early days of the Saenger. The article noted that Guarino wanted to revamp the theater to its original state – except for modern seating and things like that. But, as we now know, Guarino’s hint of ‘things like that,’ possibly included plans for a piggyback theater in Saenger, and the ultimate reform of its original state.