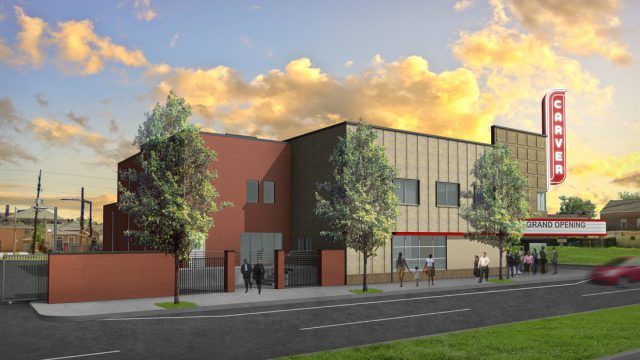 The Carver Theater was a historically black theater, located on 2101 Orleans Ave, just outside the Treme neighborhood of New Orleans, the oldest black neighborhood in America. Many political and cultural events took place in Treme that shaped the course of black America over the past century. It remains today a predominantly African American neighborhood, and its significance to the New Orleans community and America is invaluable. Many of the theaters patrons lived in this neighborhood, in particular in the large all-black Laffitte housing projects, which were located across the street from the Carver Theater.

The Carver was named after George Washington Carver, one of the greatest African American scientists and leaders of the black community. He rose from slavery to become a historical figure, helping to pave the way for African Americans. His legacy was able to live on through the Carver Theater, that, much like Carver, rose to success during a time of discrimination and segregation.
The Carver theater was built in 1950. It was one of the many African American theaters in the New Orleans area at that time. The black market was expanding, both in population and in wealth. New Orleanian blacks had new wealth since the war, and the increase of population and theater popularity created a high need for a new, and much improved, all-black theater. Many of these theaters were built by wealthy white men who saw them as promising investments. This particular theater was owned and operated by Joy Theater, who became actively involved in the New Orleans theater business and is still a large player in the business today.

The theater itself was well-maintained and its facilities were luxurious, which was quite the opposite of many black theaters at that time. It was created to fulfill the wishes of its customers who were not welcome or able to attend other places of this status. The theater was designed beautifully by architect Jack Corgan and deliberately built without a balcony, since that was where the Jim Crow laws mandated blacks to sit in most performance spaces. The theater was medium sized, holding 1,000 audience members.

The Carver Theater was a great success during the 1950’s. Like many other black theaters, it thrived for about ten years until white theaters in New Orleans became open to all citizens due to the civil rights movement. The theater finally closed its curtains in 1980. The theater was turned into office spaces, yet its original features remain in tact.

The Carver Theater is registered as a historic landmark under the National Register of Historic Places. It was part of a larger phenomenon, and an important piece of African-American entertainment during a time when such places like the Carver were rare, and poor facilities for African-Americans were the norm.