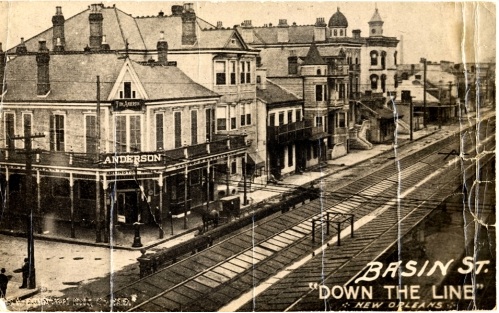 Created by municipal ordinance in 1897, Storyville was New Orleans’s infamous red-light district. It remained open until 1917, when the federal government shut it down as part of a nationwide crackdown on vice districts. While Storyville was only one of many red-light districts during these years – every major and most minor American cities hosted at least one such district – it stood out for several reasons. First, New Orleans had long maintained an international reputation for sexual license and a flamboyant disregard of traditional morality. Storyville’s notoriety perpetuated that image of the city and raised it to a new level. Second, New Orleans’s history as a French, and then Spanish, colonial city lent it a foreign feel, even after nearly a century of American rule. This foreign-ness, along with its subtropical climate and large mixed-race population, made New Orleans an exotic enclave within the Deep South.