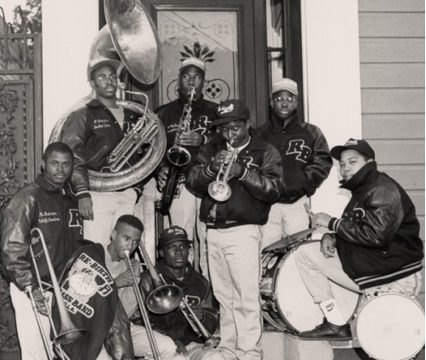 The Rebirth Brass Band has set the standard for modern brass band music in New Orleans since their beginnings at Joseph Clark High School in the musically fertile Treme neighborhood (6th Ward) in 1983. Rebirth was the first brass band to add hip hop, rap, and contemporary rhythm and blues to their repertoire and they have released fifteen albums and toured the world many times, They started playing in Jackson Square for change, but soon moved on to regular gigs at the legendary Glass House and their famous ongoing Tuesday night residence at the Maple Leaf Bar. Even with their international acclaim, they have remained true to their roots and continue to play second-line parades on the streets. As such, they have set a high standard for the younger generations of brass band musicians. In 2012, Rebirth received a Grammy Award for their collection, Rebirth of New Orleans.

The Rebirth Brass Band started in 1983 when three high school students in the Clark High School marching band — trumpeter Kermit Ruffins, sousaphonist Philip Frazier, and his brother bass drummer Keith “Shorty” Frazier — formed a separate brass band outside of school. In an article in Marquee Mag, Keith Frazier recalled, “My brother Phillip put a group of guys together to form a brass band, so he picked people from the marching band we were in to join him. We learned some traditional songs like ‘When the Saints Come Marching In,’ ‘Mardi Gras,’ ‘Big Chief,’ stuff like that. We couldn’t get any gigs in bars because they were serving alcohol, and we were too young, so we decided to go down to Bourbon Street in the French Quarter and play for tips. We did that for a whole summer. We would get together at 3 p.m. every day, and go out and play for tips.”** They soon branched out into R&B, funk, and hip-hop, following the lead of their immediate musical forebears, the Dirty Dozen Brass Band, who were more jazz-oriented.

Rebirth recorded a debut album for Arhoolie Records, Here to Stay (1984), at the Grease Lounge (now the Candlelight Lounge) on N. Robertson Street in the Treme – it was produced by Jerry Brock, the founder of WWOZ-FM. The same year, the band started a famous weekly gig at the Glass House, a small club on S. Saratoga Street in Central City, following a tradition started by the Dirty Dozen. With a weekly gig and an album in the can, they recorded a local hit single, “Do Watcha Wanna,” for trumpeter Milton Battiste’s label Dubat Records, and it remains their theme song. The band toured in Europe in 1987 – with a stop at the Montreux Jazz Festival – and in 1989, opened for the Grateful Dead on New Year’s Eve in San Francisco. In 1991 they started their ongoing weekly Tuesday night gig at the Maple Leaf Bar on Oak Street in the Carrollton section of New Orleans. They became renown not only for their club performances, but also their playing the four-hour second line parades that roll every Sunday in the black neighborhoods of New Orleans sponsored by Social Aid and Pleasure Clubs such as the Prince of Wales, the Lady Buck Jumpers, the Revolution, the Money Wasters, The Sudan, and the Young Man Olympians.

More albums followed: 1991’s Rebirth Kickin’ It Live! was recorded at the Glass House and included an anthem, “Freedom,” dedicated to Nelson Mandela; 1992’s Take It To The Streets; 1994’s Rollin’ was Kermit Ruffins’ last record with Rebirth before leaving the band to start a solo career; 1997 brought We Come To Party with its now-standard “Fire.” Producer Jerry Brock recorded Rebirth live at the Maple Leaf in 1999 and it was released as The Main Event: Live at the Maple Leaf. This collection features a half-hour long medley of some of their most popular numbers mixed into the band’s interpretation of TLC’s “Waterfalls.” Hot Venom (2000) featured local rappers Souljah Slim (the stepson of founder Philip Frazier) and bounce artist Cheeky Blakk, and the record earned it a warning label for its profane language, a first for a brass band. The collection also featured trombonist Tyrus Chapman’s anthem “Let Me Do My Thing.” In 2010 Rebirth signed with the Basin Street Records label and promptly recorded their Grammy-winning collection Rebirth of New Orleans (2011) and a follow-up album, Move Your Body (2014).