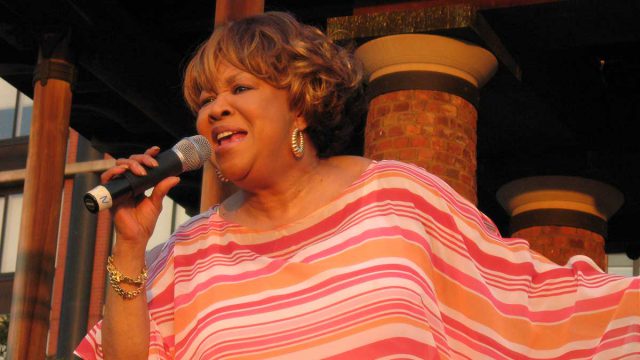 Mavis Staples (born 1939 in Chicago) is a Gospel singer who has had success in the R&B and folk genres across six decades. Her warm, gravelly voice is still going strong as she conveys, through music, the root-strong tenacity of life in the segregation-era Mississippi Delta, where the Staples family originated.

Staples’ voice led the award-winning family group, the Staple Singers, as they racked up accolades in both the Black gospel and secular music world. The Staple Singers remained on top of the R&B and pop charts in the early 1970s with their back-to-back hits, “If You’re Ready,” “Respect Yourself,“ “I’ll Take You There” and “Let’s Do It Again.” Singing with her father, Roebuck “Pops” Staples (1915-2000), sisters, Cleotha (1934-2013) and Yvonne (b. 1938), and brother Pervis (b. 1935), Mavis traveled all over the world, standing as a symbol of both the Civil Rights and Women’s Liberation movements.

Mavis and her siblings, along with her father, started singing gospel in church in the late 1940s and had their first hit, “Uncloudy Day” in 1956. Pops Staples took the family and hit the road in 1957 after Mavis graduated from high school. The Staples soon became known for their spiritual “message” music with songs such as “Why Am I Treated So Bad?,” “H-A-T-E (Don’t Live Here Anymore)” and “Heavy Makes You Happy (Sha-Na-Na-Boom).” Mavis would trade lead vocals with Pops in a traditional call-and-response to strengthen the song’s theme – his smooth tenor balancing out her rough-hewn alto – as her sisters and brother harmonized in the choral tradition.

Mavis became ‘the voice’ of Stax Records, a Memphis-based label, which prided itself as purveyors of Southern soul and showcased a respected, integrated studio band with musicians such as Booker T. Jones (Booker T & the MGs), Isaac Hayes and Steve Cropper. Beginning in 1971, Stax released the Staples’ most memorable No. 1 singles “Respect Yourself” and “I’ll Take You There.” After the demise of Stax, The Staple Singers moved on to the Curtom label led by renowned R&B singer and guitarist Curtis Mayfield. The collaboration led to two successful film soundtracks, “A Piece of the Action” (1970) and “Let’s Do It Again” (1974). Both films were successful ‘buddy movies’ featuring Sidney Poitier and Bill Cosby. The family continued to tour well into the 1990s, deftly moving between gospel and R&B, maintaining their lofty musical status in both worlds.

Mavis Staples became a sought-after solo artist in multiple genres, including rock, blues, country and jazz. Mavis has performed and recorded with such artists as Ray Charles, The Band, Nona Hendryx, Delbert McClinton, Los Lobos, Dr. John, Natalie Merchant, George Jones and Bob Dylan (who, according to Mavis, once asked Pops for her hand in marriage). Numerous hip-hop artists, including Salt ‘N’ Pepa and Ice Cube, have sampled Mavis’ music. Staples performed “The Weight” in The Band’s seminal film, The Last Waltz in 1976.

Mavis has always let her voice flow between gospel and Delta blues. Her sonorous tone gives a song gravitas, whether she is singing a Dylan anthem or a hymn from the Black Baptist canon. She toured for several years performing the music of Gospel legend Mahalia Jackson, a longtime family friend and musical influence. The 1996 album, “Spirituals and Gospels: A Tribute to Mahalia Jackson” received numerous awards and accolades in the Gospel realm. Staples stretched her genre wings to collaborate on two albums with Prince [“Time Waits for No One” (1989) and “The Voice” (1993)] and Ry Cooder [“We’ll Never Turn Back” (2007)].
Staples has appeared as herself in a number of films, including Prince’s Graffiti Bridge and the R&B festival documentary, Wattstax, and television shows The Cosby Show and New York Undercover.

Mavis Staples won a Grammy in 2011, her first as a solo artist, for the album, “You Are Not Alone” (Best Americana Album), which was produced by Jeff Tweedy. She was awarded an honorary doctorate from Berklee College of Music that same year. Staples has appeared as herself in a number of films, including Prince’s Graffiti Bridge and the R&B festival documentary, Wattstax, and television shows The Cosby Show and New York Undercover.

Karen Celestan was the senior program manager for the Music Rising at Tulane initiative (2012-2014). She is the co-author of three books Unfinished Blues: Memories of a New Orleans Music Man with Harold Battiste, Jr.; Freedom’s Dance: Social, Aid and Pleasure Clubs in New Orleans with Eric Waters; and So. So Pretty: Mardi Gras Indian Queens in New Orleans with Cherice Harrison-Nelson.