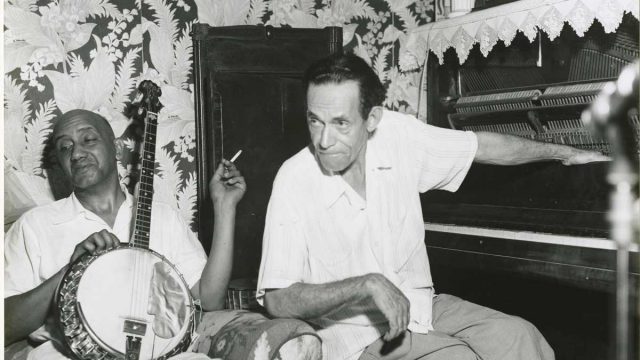 Self-taught Afro-French pianist and banjoist Louis Gallaud (1897-1985) was born in the Back o’ Town (Third Ward) section of New Orleans and gained his first exposure to jazz in the 1920s in that neighborhood. He performed as a pianist with guitarist George Jones at Ben Mulligans’s (later the Pelican) on South Rampart and with Punch Miller at the Golden Slipper on Perdido Street in the early 1920s and also worked at Milneburg with the saxophonist Eddie Johnson and at the Ruby Restaurant in Little Woods, on Lake Pontchatrain. During the 1920s Gallaud performed with Chris Kelly, mostly at house parties, and with Oscar Celestin, Willie Pajaud, and clarinetist Alphonse Picou. In the 1940s he worked with Big Eye Louis Nelson at Luthjen’s and with Kid Howard and Albert Burbank. He studied music after World War II at the Grunewald School. He recorded with clarinetist Raymond Burke’s Speakeasy Boys in 1949 and remained musically active into the 1970s, when he recorded as a leader for the first time.