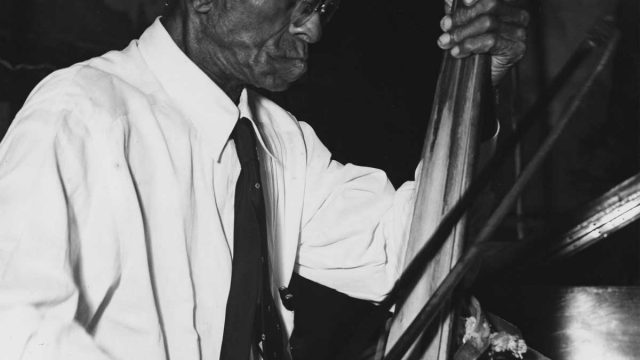 Joseph “One Eyed Babe” Phillips Interview (3/25/1957): Born in St. John the Baptist parish, bassist Joseph “One Eyed Babe” Phillips (1879-1960) began as a guitarist performing with Casimir Matthews’ Magnolia Band before moving to New Orleans in 1919. He worked with the jazz bands of Jack Carey, Foster Lewis, Chris Kelly, and Oscar Celestin in the 1920s. After working sporadically during the Depression, in the 1940s and 50s he resumed jazz bass playing and often worked on the West Bank at Speck’s Moulin Rouge with Kid Thomas and in New Orleans East at Mama Lou’s in Little Woods and at the Happy Landing near the Lakefront airport, formerly the Shushan Airport.