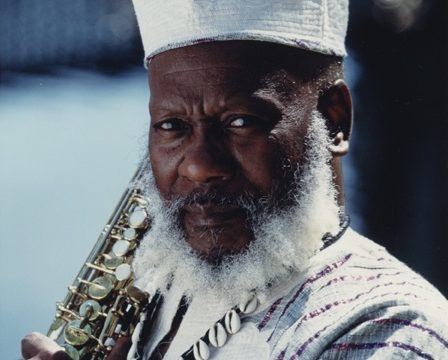 Harold Battiste is a multi-instrumentalist, songwriter/composer/arranger, producer, music director, educator, and record-industry veteran who has made enormous contributions to rhythm & blues, mainstream pop music and avant-garde jazz. Born in New Orleans in 1931, Battiste started out singing in his church choir. He studied the clarinet in high school, going to on graduate from Dillard University with a degree in music and education in 1953. While in college Batiste began performing in the horn section with various bands in local nightclubs. After a stint as a highschool music teacher in rural western Louisiana, Battiste returned to New Orleans in 1954 to teach school in his home town. Before long, however, he became a full-time, self-employed musician.

Soon tiring of playing in other leaders’ bands, Battiste switched to the saxophone and teamed up with some of the city’s other best and brightest young musicians — including pianist Ellis Marsalis, drummer Ed Blackwell, bassist Richard Payne, and clarinetist Alvin Batiste — to form the American Jazz Quintet. New Orleans offered limited opportunities to perform modern jazz however. In 1956, with encouragement from the great saxophonist Ornette Coleman, the band relocated en masse to Los Angeles. With a demo recording in hand, Battiste made the rounds of Los Angeles-based record companies, in search of a contract. While the elusive record deal did not materialize, the quest opened other doors. The labels that Battiste approached included Specialty. This L.A.-based company was actively involved in the New Orleans R&B scene through local artists such as Lloyd Price, and hitmakers including Guitar Slim, and Little Richard, who came to New Orleans to record with local musicians.

Specialty did not sign Battiste’s the American Jazz Quintet, but did hire him as a talent scout on the fertile New Orleans scene, Battiste began dividing his time between the two cities. In Los Angeles, Battiste wrote the arrangement for R&B/pop crooner Sam Cooke’s hit “You Send Me.” In New Orleans, he produced great R&B records for Specialty artists including Art Neville (“Cha-Dooky-Do”) and Larry Williams (“Bad Boy”) and he also worked, for other labels, on such hits as Joe Jones’ “You Talk Too Much” and Lee Dorsey’s “Ya-Ya.” Battiste was still eager to record with his own jazz band, however, and in 1961 he co-founded the New Orleans-based A.F.O. label, along with some of his compatriots in the American Jazz Quintet. A.F.O. (the letters stood for All For One, underscoring the company’s egalitatarian ideals) was one of America’s first black-owned and musician-owned record labels. By now Battiste knew the music business well enough to realize that jazz records do not sell in large numbers, modern jazz especially. Accordingly the A.F.O partners decided to subsidize the music that they wanted to make with mainstream, commercial R&B. In 1962 “I Know,” by New Orleans singer Barbara George, brought A.F.O. a major national hit on the R&B and pop charts alike. Using the proceeds from it, A.F.O. released jazz LPs incluing Ellis Marsalis’ Money Puzzle.

In Los Angeles, meanwhile, Battiste played on sessions for the famed producer Phil Spector, further enhancing his reputation as a versatile professional. In 1965 Battise reconnected with a Specialty Records colleague named Sonny Bono, and wrote the catchy arrangements for “I Got You Babe,” a smash hit for the Bono’s husband-and-wife pop duo, Sonny & Cher [sic.] Battiste went on to craft many of their subsequent hits and serve as the musical director for their two nationally broadcast television programs, the Sonny & Cher Comedy Hour, and the Sonny & Cher Show. Through Sonny & Cher, Battiste reunited with a New Orleans pianist and guitarist named Mac Rebennack who was working in Los Angeles as a session musician. In 1967 Rebennack decided to record a hybrid of New Orleans R&B and voodoo-infused psychedelia, and to present himself under the moniker Dr. John the Night Tripper. Battiste produced and arranged the early incarnations of this strange mixture, including the album Gris-Gris which was released in 1968. Despite the esoteric nature of such music, Battiste made it commercially viable and successful, thus establishing Rebennack’s still thriving, alter-ego career.

Battiste stayed based in Los Angeles for another two decades, working with such prominent artists as Tom Waits, and Marilyn McCoo and Billy Davis. Returning to New Orleans, in 1989 he joined his old A.F.O. colleague Ellis Marsalis on the Jazz Studies faculty at the University of New Orleans. Via this position, Battiste continued to profoundly influence the city’s vibrant modern jazz scene. In this he revived A.F.O., re-releasing old material on CD, commissioning new recordings, and publishing a musician’s training manual entitled The Silver Book. Battiste also established the non-profit AFO Foundation, a non-profit service and educational organization dedicated to documenting the heritage of New Orleans music and musicians.

Since returning to New Orleans, Battiste has received numerous awards and tributes, as befits a revered elder statesman. The new millennium found Battiste working on his autobiography, with extensive assistance from journalist Karen Celestan. These efforts culminated in 2010 with publication of Unfinished Blues: Memories of a New Orleans Music Man, published by the Historic New Orleans Collection.