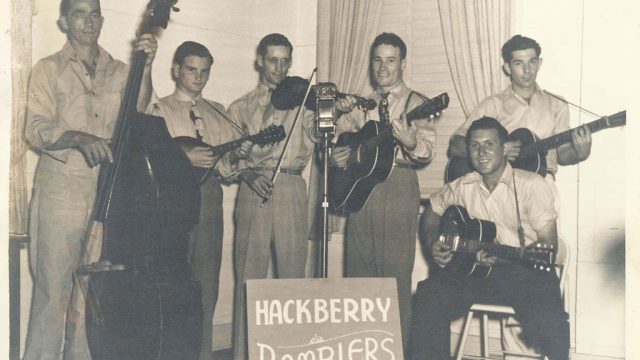 The Hackberry Ramblers performed a multi-genre blend that was primarily based on Cajun music and western swing from 1933 to 2005. In addition the band’s improbably eclectic repertoire featured R&B and Gulf Coast swamp-pop, early twentieth-century popular songs, miscellaneous novelty numbers such as “A Little Rendezvous in Honolulu,” early rock & roll and jump blues, classic “honky-tonk” country, and an adaptation of Credence Clearwater Revival’s “Proud Mary.” Whatever the genre, the band’s intent was to make people dance.

The band was co-founded by fiddler Luderin Darbone and multi-instrumentalist Edwin Duhon, and these life-long friends led the band for the next 72 years. As young, forward-thinking men the Hackberry Ramblers brought considerable innovation to the South Louisiana music scene. They were pioneers in combining Cajun music, sung in French, with material sung in English, thus merging two traditions that had previously been separate. In addition, the Hackberry Ramblers introduced electronic amplification to South Louisiana’s dance halls by way of a “public address” system ordered from the Sears-Roebuck catalogue. Some venues still did not have electricity in the 1930s, however, and at these dancehalls the Ramblers powered their primitive sound system from the battery of Darbone’s idling Model-T Ford.

The South Louisiana music scene was profoundly changed by amplification. Until its advent, stringed instruments such as fiddle and guitar could barely be heard over the noise of a crowd. As a result these acoustic instruments were limited to simplistic roles providing rhythmic accompaniment for the accordion, which did not depend on electricity for volume and audibility. Once stringed instruments could be heard loud and clear, though, musicians who played them could step up to microphone and take solos. This provided incentive for them to improve their technique, with the broader result that the standards of musicianship on the south Louisiana scene improved in general. Such musical developments reflected the broader socio-economic and cultural changes in play at in South Louisiana at the time. The discovery and production of oil, plus Governor Huey P. Long’s energetic program of road construction, brought industrialization to the region, decreasing its rural isolation. The invention and expansion of radio similarly increased contact with mainstream American culture. As a case in point, the Hackberry Ramblers learned much of their English-language repertoire from radio broadcasts.

Darbone and Duhon founded the band in 1933 in the far-flung village of Hackberry, in Louisiana’s Cameron Parish. Initially Darbone played fiddle and Duhon played acoustic guitar. This configuration reflected the newfound stature of acoustic instruments mentioned above. The trend became so prominent that the accordion faded from popularity for approximately fifteen years, a period of time that came to be known as the Cajun string-band era. The accordion regained its prominence after World War II, however, and it is now considered the signature instrument of both Cajun music and zydeco.

After adding a second guitarist, Darbone named the band The Hackberry Ramblers and the group began performing live on a radio station in the nearest big city, Lake Charles. Exposure on the airwaves brought the Ramblers ample work at dancehalls all over southwest Louisiana and east Texas. With regular jobs scarce during the depths of the Depression, they played full time for several years. Few roads in the area were paved back then, limiting car travel to the speed of 35 miles per hour. As Darbone would point out decades later, it took longer to drive from Hackberry to Basile, Louisiana in the 1930s than to fly to from Lake Charles to New York in the ‘90s.

In 1935 The Hackberry Ramblers signed a contract with RCA-Bluebird, a prestigious national-level record label. The Ramblers’ prolific output of 82 songs for Bluebird, released on 78 r.p.m. records, included the first version of “Jolie Blonde” under that title. (It had previously been recorded as “Ma Blonde Est Parti.”) “Jolie Blonde” has since come to be informally regarded as “the Cajun national anthem.” The Ramblers’ work for RCA displayed the same variety as the wide stylistic range of their live-performance repertoire. Darbone secured a sponsorship deal from the Montgomery-Ward department store chain to promote a new brand of tires known as Riverside. In return for such underwriting the band began recording all songs with English lyrics under the name the Riverside Ramblers. These numbers included a country hit “Wondering,” a song that became a hit again for Webb Pierce, a fellow Louisianan, in 1951.

By the late ’40s The Hackberry Ramblers had dramatically expanded their original acoustic-trio format into a large western-swing band with trumpet, saxophone, and electric guitar. The group made some fine recordings with this configuration around 1949, and also utilized it during a ten-year house-band gig, circa 1946 – ’56, at the Silver Star club in Sulphur, LA. By the ‘60s, however, the pendulum of public taste had swung away from Cajun music, and the Ramblers found little demand for their services. All of the band members had day jobs, by this point, and Luderin Darbone considered letting the band dissolve. This would have happened if not for Chris Strachwitz, the founder of Arhoolie Records, who has documented a wealth of Louisiana music during the past 50 years. Strachwitz recorded the Ramblers in 1963, reissued some of their Bluebird classics, persuaded them to not disband, and hired them to perform at the Berkeley Folk Festival (California) in 1965.

For the next twenty-odd years the Hackberry Ramblers played primarily nursing homes in and around Lake Charles. A 1987 performance at the Louisiana Folklife Festival in Baton Rouge led to a long association with this writer as the band’s drummer, manager, and producer. As an initial result the band began to tour nationally. 1993 saw the release of the album Cajun Boogie, their first new recording in 30 years. It was well received, leading to more touring and
the release of the album Deep Water, in 1997, which earned the Ramblers a Grammy nomination. The Hackberry Ramblers’ 1990s albums featured guest appearances by Marcia Ball, Rodney Crowell, Michael Doucet, and Jimmie Dale Gilmore, whose work was influenced, in various ways, by the Ramblers and their milieu.

The Hackberry Ramblers continued performing for another eight years, appearing at the Newport Folk Festival, on the Grand Ole Opry, touring coast to coast, and performing in Europe.
Their last full-band performance took in Baton Rouge in November of 2005. In 2008 Luderin Darbone made his final appearances, at the New Orleans Jazz & Heritage Festival and Festival International de Louisiane in Lafayette, with accompaniment by the Lost Bayou Ramblers, a young band that he inspired.