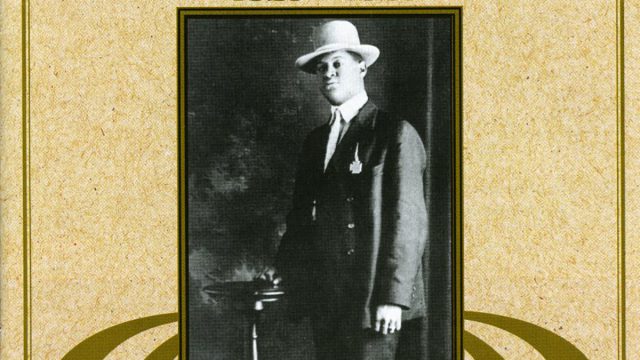 Keppard was born in the Creole of Color community of downtown New Orleans, Louisiana. He grew up and worked as a shoe shine on Basin Street before he was a musician, His older brother Louis Keppard was also a professional musician. Freddie played violin, mandolin, and accordion before switching to cornet. After playing with the Olympia Orchestra he joined Frankie Dusen’s Eagle Band, taking the place recently vacated by Buddy Bolden. Soon after Bolden was off the music scene Keppard was proclaimed “King Keppard” as the city’s top horn player (see: jazz royalty). This was mostly because he kept Buddy’s style which was ever so popular but was not ever recorded.
About 1914 Joe “King” Oliver won a musical “cutting contest” and claimed Keppard’s crown; soon after Keppard accepted an offer to join Bill Johnson’s band in Los Angeles, California.

Johnson and Keppard’s band became the Original Creole Orchestra which toured the Vaudeville circuit, giving other parts of the USA a first taste of the music that was not yet known as “jazz”. While playing a successful engagement in New York City in 1915 the band was offered a chance to record for the Victor Talking Machine Company. In retrospect this would probably have been the first jazz recording. An often repeated story says that Keppard didn’t want to record because then everyone else could “steal his stuff.” Another well known story is that he was so paranoid about the risk of being copied that he sometimes played with a handkerchief over his fingers to conceal how he played. The recording company offered him $25 flat fee to make a record (a fairly standard rate for non-star performers at the time), far less than he was earning on the vaudeville circuit. His retort to this offer, according to Lawrence Gushee’s research, was: “Twenty-Five dollars? I drink that much gin in a day!” The reminiscences of the other members of the Creole Orchestra reveal that another factor was that the Victor representative had asked them to make a “test recording” without pay, and the band balked, fearing it was a ploy to have them make records without being paid.

About 1917 Keppard settled in Chicago, which would remain his home (except for briefly going to the East Coast to work with Tim Brymn’s band about 1920). Keppard worked in Chicago both as a soloist and with the bands of Jimmie Noone, Johnny Dodds, Erskine Tate, Doc Cook (for several years), Don Pasquall, and Lil Hardin Armstrong. Keppard was one of the first to bring jazz to the West Coast.

Keppard made all his known recordings in Chicago from 1923 to 1927. The only recordings he is certainly on are three sides under his own name (“Freddie Keppard’s Jazz Cardinals”), two with Erskine Tate’s Vendome Orchestra, and a dozen with Doc Cooke’s Orchestra, most of which are wonderfully arranged and with Keppard on second cornet. Note that second cornet was the logical and quite demanding seat for the premier cornetist in a two-cornet band, as evidenced by Louis Armstrong’s role (one example of many) in similar sized bands and orchestras around the same period. His “Stockyard Strut” is in fact a stunning improvisation on the chords of “Tiger Rag”. Aficionados will derive great pleasure from his contributions to the Doc Coooke recordings, wherein he plays the ‘walking-talking’ style of Stomp Cornet that pre-dates jazz by about a half generation and follows naturally from ragtime by the same margin. There are a few other recordings on which he plausibly may appear, and a great many more that are often dubiously attributed to him. Keppard was widely imitated both in New Orleans and Chicago, including contemporaneous and highly regarded players such as Louis Panico and Frank Guarante.

Many of his contemporaries said that either Keppard was past his prime when he recorded or that his recordings do not do him justice. Nonetheless, informed listening to the sides on which he is undoubtedly present reveal Keppard to be technically a very proficient player and an adventurous improviser. Many make the mistake of comparing his accomplishments to jazz of a later era, a comparison which does neither approach any favours.

Keppard’s style is much more raggy compared to Oliver’s blues tinged style. While Oliver had more admirers, to some extent preference was a matter of taste; Jelly Roll Morton, Lil Hardin Armstrong, and Wellman Braud all thought Keppard superior to Oliver.

Several musicians with clear memories of Buddy Bolden said that Freddie Keppard sounded the most like Bolden of anyone who recorded. This is how Keppard got his fame but also how he lost it. Keppard did not have a sound of his own and he came up in between Buddy, Oliver, and Armstrong. Keppard was extremely talented but was not unique.

Keppard suffered from alcoholism and tuberculosis in his final years, and died, largely forgotten, in Chicago.