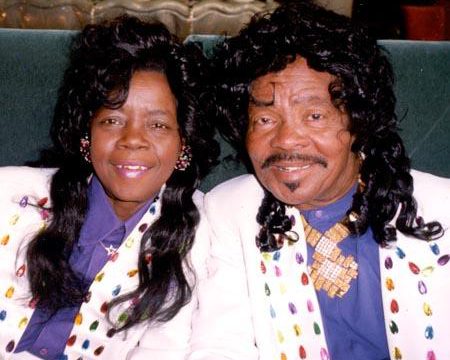 Ernie K-Doe started his singing career in his church choir and went on to sing with such spiritual groups as the Golden Choir Jubilees of New Orleans and the Divine Traveler. He was inspired by such artists as Big Joe Turner, Ray Charles, B.B. King, Bobby Bland, and Eddie Jones, known to all as Guitar Slim.

At the age of 15, while performing at an amateur night show, he was heard by the manager of the legendary Flamingos. His first recording was the also legendary Chess Record Company with “I Only Have Eyes for You.”

Ernie K-Doe had a strong desire to perform, and did with such enthusiasm that he made audiences scream for more. He says he enjoys singing because it gives him a feeling of happiness and joy. This goes back to the days when he felt that way with the spriritual choirs.

Early in his career, he practiced with Joe Tex at the Dew Drop Inn, which is the reason they have similar styles in dancing with the microphone, falling down, and rolling off the stage. He says he never has to move when performing, because he never could keep still, although he never had any dancing lessons. He considers the stage to be a ring and remarks, “If you don’t get out there and move they would kill you.” Having traveled all over the world, he recalls his best times at the Club Lingerie in Hollywood and the Apollo Theater in New York City. Ernie K-Doe has sung at the Apollo Theater in New York eight times, the Howard Theater in Washington, DC three times, the Uptown Theater in Philadelphia six times, the Regal Theater in Chicago 12 times and Carnegie Hall in New York one time.

K-Doe has recorded such hits as “A Certain Girl,” “T’ain’t It the Truth,” “Come On Home,” “Te-Ta-Te-Ta-Ta,” “Later for Tomorrow,” just to name a few. His biggest recording was “Mother-in-Law,” which sold millions. K-Doe says it will last to the end of the Earth, “because someone is always going to get married.”

Ernie K-Doe says he is going to bring New Orleans back and in the process, himself. For the last few years, K-Doe has been on the path to sobriety after living in an alcoholic haze for years. The singer, who rose to fame in 1961, when his “Mother-in-Law” was the No. 1 song in the nation, is back on the job, sober and enthusiastic.

And he wants to restore New Orleans to the glory of its heyday — when it was feeding ground for such greats as Fats Domino, Eddie “Guitar Slim” Jones, Little Richard, Barbara George and many others.

To do it, K-Doe opened Ernie K-Doe’s Mother-in-Law Lounge at 1500 N. Claiborne Avenue and he performs with an alternating cast of musicians. To his mind, the club is a place where musicians can help one another just like in the old days.

By the way, Ernie K-Doe was right about the song “Mother-in-Law.” It will last to the ends of the Earth, or at least for a while. Ernie got married in January of 1996 to Antoinette Fox, and her mother was watching over the ceremony! So look out, K-Doe, and look out, world! K-Doe is still doing what he does best: entertain!