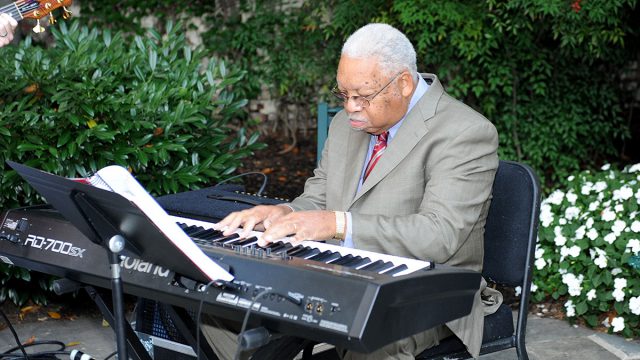 Ellis Marsalis, Jr. is a music educator and jazz pianist from New Orleans, LA. With a distinctive piano style, a focus on modern jazz and a gift for teaching, Marsalis is one of the most widely respected musicians of his generation. A central figure in the jazz revival in New Orleans during the 1950s, ’60s and ’70s, Marsalis played a key role in the gradual reconciliation of the Dixieland tradition of his home city with the more worldly sophistication of modern jazz, an approach that would be a primary influence on a large number of well-known New Orleans musicians including Donald Harrison, Terence Blanchard, Nicholas Payton, Kent and Marlon Jordan, Harry Connick, Jr., and, of course, Marsalis’s four musician sons.

Marsalis was born on November 14, 1934 to parents Florence and Ellis Marsalis, Sr. As a youth he played the tenor saxophone and, at age 11, entered Xavier University’s Junior School of Music. In high school he performed in a rhythm and blues band called The Groovy Boys. During this time he also learned to play the piano, which would eventually become his primary instrument.

Marsalis enrolled at Dillard University in New Orleans in 1951 and graduated four years later with a degree in Music Education. Soon afterward he joined Alvin Batiste (clarinet), Harold Battiste, Jr. (tenor saxophone), Ed Blackwell (drums), and Richard Payne (bass) to form the American Jazz Quintet. In 1956 Marsalis traveled to Los Angeles with Blackwell to pursue an opportunity to play with Ornette Coleman. This stint was cut short when, that same year, he was drafted into the Marine Corps.

During his two years in the Marines, Marsalis was stationed in California and played piano in a quartet called The Corps Four, who performed on television and radio shows. It was here that Marsalis furthered his skills as an accompanist to singers.

Back in New Orleans at the completion of his service, Marsalis married Dolores Ferdinand. The two would begin to build a family that would eventually include six children, all male. Four of those sons would grow up to be renowned musicians: saxophonist Branford (b. 1960), a bandleader and composer of distinction; trumpeter Wynton (b. 1961), a nine-time Grammy winner and artistic director of Jazz at Lincoln Center; trombonist Delfeayo (b. 1965), an acclaimed record producer and composer; and drummer Jason (b. 1977), a much-in-demand polyrhythmic virtuoso. The family also includes two non-musician sons, Ellis III (b. 1964) and Mboya Kenyatta (b. 1970).

One of Marsalis’s first musical projects back at home was the formation of a quartet that included saxophonist Nat Perilliat, bassist Marshall Smith and drummer James Black. The group released an LP of bebop-influenced compositions in 1963 titled Monkey Puzzle. During this period Marsalis also recorded with Nat and Cannonball Adderley (In the Bag, 1962).

The family moved briefly to Breaux Bridge, LA in 1964, where Marsalis worked as band director at Carver High School, but was back in New Orleans by 1966. Marsalis began to develop his reputation as a skilled accompanist on the local music scene, gigging at numerous local venues such as the Playboy Club.

1967 was a watershed year for Marsalis. He was invited to play piano in trumpeter Al Hirt’s band, a gig that would continue until 1970. The Hirt band was Marsalis’s most high-profile project to date, as the band was popular and enjoyed national exposure on a number of television shows of the day, including The Tonight Show. That same year, Xavier University hired Marsalis as an adjunct instructor in African-American Music.

In the early ’70s Marsalis joined the Storyville Jazz Band, led at the time by drummer Bob French. It was here that Marsalis began to explore and appreciate the more traditional jazz played by many of his contemporaries in New Orleans. During the same era, Marsalis formed a five-piece ensemble called the ELM Music Company that included James Black. The band performed regularly at Lu and Charlie’s, a legendary French Quarter jazz club.

1974 saw Marsalis studying in the Master’s Degree program at Loyola and, in one of the most important decisions of his career, he took a job teaching music at a new arts-training center called the New Orleans Center for Creative Arts, or NOCCA, a position that would cement his status as one of the most influential music educators in recent New Orleans history. Marsalis would go on to teach at NOCCA for over a decade. His students would include the aforementioned Blanchard, Payton, his four musician sons, and many others.

Marsalis earned his Master of Music degree from Loyola in 1986. The same year he moved to Virginia to accept a seat as Commonwealth Professor at Virginia Commonwealth University in Richmond. He returned to New Orleans in 1989, where he received an honorary degree from Dillard University. In the years to come, Marsalis would also receive honorary degrees from Ball State, Virginia Commonwealth, Tulane, and Juilliard. Also in 1989, the University of New Orleans named Marsalis as its first endowed Chair of Jazz Studies and and Jazz Studies Director. Among many accomplishments while at UNO, Marsalis played a key role in creating the Sand Bar, a popular performance space, and toured Brazil with the university’s jazz orchestra.

On August 4, 2001, to commemorate his retirement from UNO, Marsalis performed onstage with all four of his musician sons in a historic concert titled “The Marsalis Family: A Jazz Celebration.” The performance was recorded for release and marked the first time that the entire musical family had recorded together.

The Ellis Marsalis Center for Music in the New Orleans Musicians’ Village, a 17,000-square-foot complex that includes a 170-seat performance space, was unveiled in 2011. The Center houses after-school programs and classes focused on the continuation of New Orleans music and culture. The same year, Marsalis, along with Wynton, Branford, Delfeayo and Jason, were the collective recipients of the first group NEA Jazz Masters award.

Today Marsalis is still active and tours occasionally with his quartet.