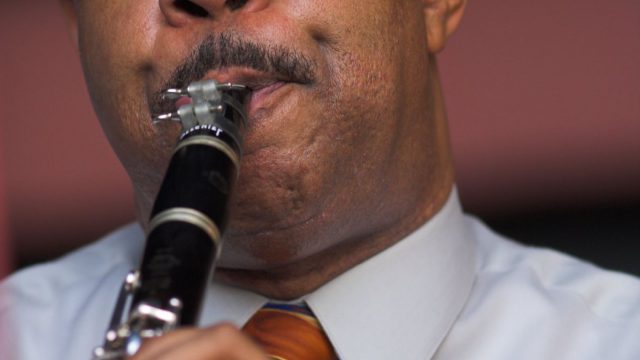 Dr. Michael White (born November 29, 1954 in New Orleans) is not only a virtuoso clarinettist, but also an acclaimed musicologist, accomplished composer, veteran educator, and historian of jazz and New Orleans music. White has been at the forefront of traditional New Orleans jazz for the past 25 years. His records continually push the music forward without leaving the past behind, and his writings and tribute concerts are incisive, interesting, and inspiring.

White comes from a musical family. His relatives played with King Oliver and Kid Ory, and one of his ancestors owned the barbershop across the street from Buddy Bolden’s house. White started playing classical clarinet, but started learning jazz in the later days of high school and college. He played in Danny Barker’s Fairview Baptist Church Band (a band that many of the brass band leaders of the 1980s played in) and Doc Paulin’s Brass Band. His experience playing for parades, funerals, and church functions with Paulin allowed him to meet and befriend some of the last original jazz musicians. He also heard jazz clarinettist George Lewis’ records for the first time which proved to be very influential on his music. He recorded a tribute record dedicated to George Lewis in 2000.

Beside Barker and Paulin, White worked with Kid Sheik Colar who heard him first playing in Jackson Square. He formed his own band, the Original Liberty Jazz Band, in 1981. The Original Liberty Jazz Band is better known in New Orleans but from 1991 until 2010, the band headlined the venerable New York City jazz club The Village Vanguard on New Years Eve. The band is still his main unit, and he has released 11 records with that band. The last 6 have been for Basin Street Records. White has received great critical acclaim for his adaption of non-traditional tunes to the traditional style. On Adventures in New Orleans Jazz Vols. 1 and 2, he has taken songs as varied as Leadbelly’s “Midnight Special,” Hank Williams’ “Jambalaya,” and Bob Marley’s “One Love” and turned them into traditional jazz numbers.

White also is a fantastic composer. His first record after Katrina, “Blue Crescent” is a meditation on the storm and its effects with mostly original compositions that are masterful in their emotion, nuance, and playing skill. “Blue Crescent” is a major artistic statement in general, and it is one of the great artistic works about this apocalyptic disaster. White’s home at the time of Katrina and the Federal Floods was only a couple blocks from the levee failure at the London Avenue Canal. He had been collecting and analyzing New Orleans jazz artifacts for 3 decades. He had thousands of records, original sheet music to Jelly Roll Morton’s “Dead Man Blues” and one of Sidney Bechet’s mouthpieces. All of this was lost in the flood. Soon after he returned to the city, he did a residency in Lower Algiers at the Studio in the Woods where he composed most of “Blue Crescent”

In addition, White is credited with working with Wynton Marsalis and Jazz at Lincoln Center. He was a great influence on Marsalis’ return-to-tradition record “The Majesty of the Blues” on which he plays several beautiful solos. He has done tributes to Jelly Roll Morton at Lincoln Center. This tribute was also done at the New Orleans Jazz and Heritage Festival as was his tribute to Buddy Bolden, the mysterious originator of jazz from turn of the century New Orleans.

White also is an educator. He is the Rosa and Charles Keller Endowed Chair in the Humanities of New Orleans Music and Culture at Xavier University. He teaches Spanish and African-American Music, the same class that his mentor Danny Barker taught. He also has worked with younger musicians and bands such as the Hot 8 Brass Band, mentoring them on traditional New Orleans music.
White’s hard work, talented clarinet playing, and inspired composing has gained him well-deserved accolades and awards. He is a constant in the Downbeat Magazine Critics’ Poll. He received the rank of Chevalier of Arts and Letters from the French Government in 1987. The National Endowment of the Arts awarded him a National Heritage Fellowship Award by the National Endowment of the Arts in 2008. The Louisiana Endowment for the Humanities awarded him the prestigious Humanist of the Year Award in 2010. Tulane University gave him an honorary degree in 2014 at their graduation which White and the Liberty Jazz Band play each year.

New Orleans jazz has been in existence for over 100 years, and Dr. Michael White not only embodies the great musicians and music that have come before him, but he updates the music for this current 21st century period while making sure via his teaching and mentoring that others will make this great music in the future.