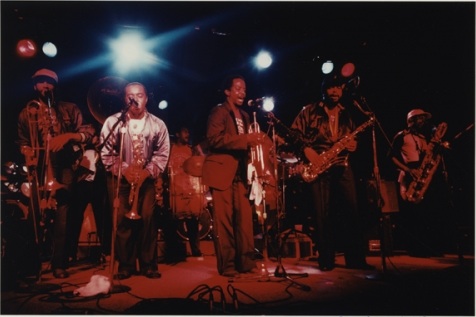 The Dirty Dozen Brass Band is a New Orleans brass band known for their mix of traditional brass band, rhythm and blues, and modern jazz music in the brass band setting. Throughout their careers, they have been innovators and pioneers in American music, and they have taken the sound of New Orleans around the world. They have played with everyone from Dr. John to Widespread Panic to the Black Crowes to Modest Mouse. Currently in their 3rd decade as a band, they are as powerful, and fun as they have ever been.

Future members of the Dirty Dozen first got together under the tutelage of guitarist/teacher/griot Danny Barker in 1972. Barker started a band for children under the auspices of the Fairview Baptist Church in the Gentilly neighborhood of New Orleans. After that band and its successor bands disbanded, the musicians who had played in the Fairview Baptist Church Marching Band (trumpeter Gregory Davis, tuba player Anthony Lacen, trombonist Charles Joseph, and saxophonist Kevin Harris continued playing together and were joined by Efrem Townes on trumpet, Roger Lewis on saxophone, and drummers Benny Jones and Jenell Marshall. It was a low point in the history of brass band music in New Orleans as there were few places to play. This gave the band freedom to open the repertoire and style of brass bands so they began playing Thelonious Monk, Charlie Parker, Bobby Womack, and Professor Longhair. This had rarely, if ever, been done in the history of New Orleans music. They were asked to play several social aide and pleasure club parades so this rehearsal band took the name “The Original 6th Ward Dirty Dozen Band (the 6th Ward being a name for the Treme neighborhood of New Orleans, an immensely musically rich neighborhood and the first African-American neighborhood in the country.) Musicians came in and out of the band before it solidified with the virtuoso Kirk Joseph on sousaphone. Joseph’s fast, modern bass lines and range on the instrument revolutionized the entire brass band sound. It is not an understatement to call him the Jimi Hendrix of the sousaphone.

With regular gigs at Daryl’s in the 7th Ward and The Glass House on S. Saratoga Street Uptown, the Dirty Dozen gain a reputation for both being a tight and serious jazz band and a band that brought a riotous party. By the early 1980s, they had started touring in the United States and Europe. Their first recordings “My Feets Can’t Fail Me Now” and the live set “Mardi Gras In Montreux” were raucous and fun recordings that included New Orleans standards such as “St. James Infirmary” and other well-known, unexpected songs like the Flintstones cartoon theme.

Columbia Records signed the band in 1987 and released their next four records. 1987’s “Voodoo” featured guests Dr. John, Branford Marsalis, and Dizzy Gillespie who had sat in with them at the Glass House. In 1990 they recorded “The New Orleans Album” that paired some of their New Orleans musical heroes such as Dave Bartholomew, Eddie Bo, and Danny Barker with some of the classic New Orleans rhythm and blues songs. Elvis Costello also appeared on this record. 1993 saw “Jelly,” a record of New Orleanian and jazz originator Jelly Roll Morton’s compositions. All of these records combined New Orleans rhythms, serious musicianship, and a celebratory attitude.

By now other bands had heard the Dirty Dozen and wanted to sample from their unique playing. They recorded with Widespread Panic and Elvis Costello, and did tours with those bands and the Black Crowes. On the homefront, their style of music and attitude not only influenced the bands that came after them including the Rebirth Brass Band (who took their gigs at Daryl’s and the Glass House when the Dirty Dozen was on the road), The Lil Rascals Brass Band, the New Birth Brass Band, the Pinstripe Brass Band, The Hot 8 Brass Band, and many more to the present time, but the direction that they took brass band music permanently changed the way that brass band music is played and thought about in New Orleans and around the world.

In the first years of the 21st century, the Dirty Dozen Brass Band’s records and concerts continued to push the envelope of what brass bands could do. They added a trap drum set for their stage shows, dropping the more traditional and simple snare and bass drum combination. Their records included another record of New Orleans covers, “Medicated Magic” that had special guests from Norah Jones, Robert Randolph, DJ Logic, and Olu Dara. In 2004, they went into the studio and recorded an entire traditional jazz funeral that is heartfelt and emotional. It contains spirituals, blues, and gospel that encompass the New Orleans funeral idea of mourning loss and celebrating death as a release to a better place. After the sudden death of original member Anthony “Tuba Fats” Lacen in January 2004, they dedicated it to his memory as a tribute. In the wake of Hurricane Katrina and the Federal Floods, all the members of the band were displaced. Their response was to do an album length cover of Marvin Gaye’s seminal and deeply political statement “What’s Going On.” Rarely has a set of recorded music hit so precisely and deeply to encapsulate the sentiments of a tragedy as the way that the Dirty Dozen Brass Band with guests Ivan Neville, Chuck D. of Public Enemy, and Guru, make this music their own and the music of all of New Orleans.

The Dirty Dozen is still going strong. Their latest record, “Twenty Dozen” continues their mix of the new and traditional with its song list that has both Rihanna’s “Don’t Stop The Music” and “The Saints Go Marching In.