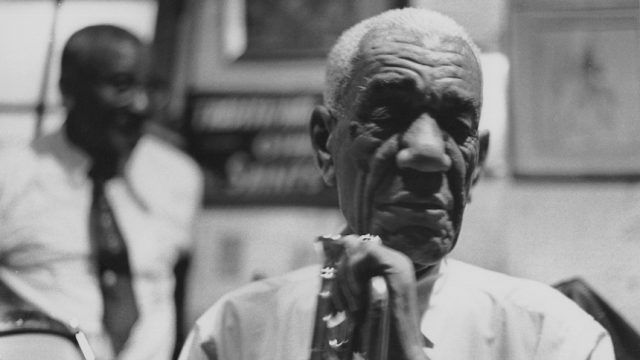 Born Wilhelmina Goodson in Marianna, Florida, jazz and blues pianist Billie Pierce (1907-1974) married the self-taught jazz cornetist and vocalist Dede Pierce (1904-1973), an Afro-French Creole born in New Orleans as Joseph De Lacroix. Billie had worked the vaudeville circuit around Pensacola, accompanying Ma Rainey and Bessie Smith, until she was called to New Orleans by her older sister Sadie Goodson to substitute as a pianist with Buddie Petit’s band on the lake steamer Madison around 1929. In 1933 she met Dede when they were performing with the clarinetist George Lewis at places like the Kingfish dance hall and the Popeye Beer Parlor in the French Quarter, and they were married in 1935. As a musical couple they were featured at dance halls such as Luthjen’s in the 7th Ward from 1949, but Dede went blind in the 1950s, and they retired temporarily in 1954. The advent of Preservation Hall in 1961 and related recordings brought about a renewed career that led to international celebrity.