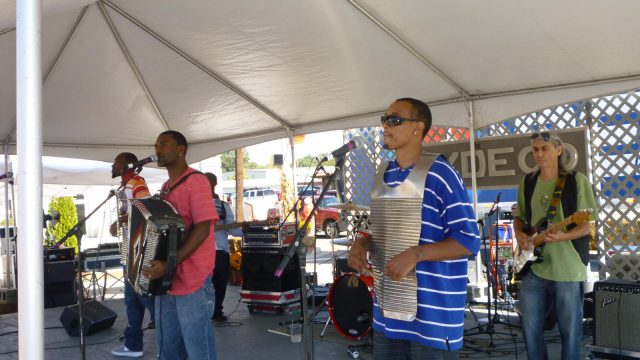 Curley Taylor was born and raised in Louisiana and has been around music all of his life. At the age of 16 Curley started playing drums in his father’s band, (Jude Taylor & His Burning Flames) which is deep in Louisiana Blues, Soul and Zydeco.

By the age of 25, Curley had played drums for some of Louisiana’s finest legends including; CC Adcock, Steve Riley, John Hart, “Lil” Bob of the Lollipops, and his uncles, “Lil Buck” Senegal and Wayne “Blue” Burns. He traveled with CJ Chenier, also considered a great Louisiana legend. While Traveling with Mr. Chenier, Curley found an interest in playing the accordion. After practicing and playing the accordion, Curley enjoyed it. He was told he “played the drums and the accordion with great emotion and natural feeling.” Curley purchased an accordion and learned to play it in about six months. During this time, friends Keith Clements (keyboard player) and Erick Minix (drummer) approached Curley and asked him to start his own band. He agreed. Soon agreeing to record a CD, Geno Delafose offered Curley and job playing the drums in his band. Geno Delafose & French Rockin’ Boogie. He began working for Mr. Delafose and worked for him for several years. Curley found it hard to practice while traveling and touring, but found a way to produce his first CD Country Boy.

This CD is Curley’s first produced project. Artists have compared his music to the great Beau Jocque. “It’s a high compliment,” Curley said, “but this is only the start.”