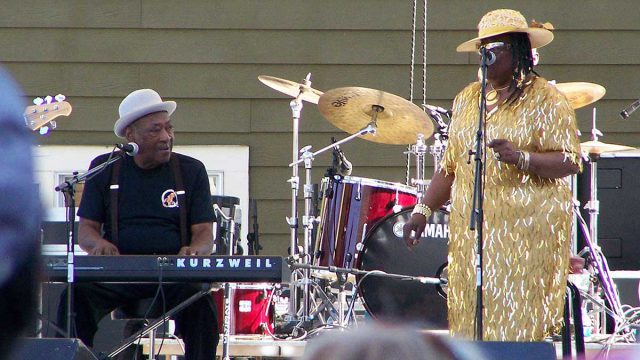 Born in 1933, and still vibrantly active at this writing, Carol Fran (née Carol Martin) is a rhythm & blues, jazz, and swamp-pop artist from Lafayette, Louisiana. (Fran’s surname reflects her 1950s marriage to saxophonist Joe Francois; ethnic names were regarded as career impediments during that era, and accordingly she dropped the dropped the second syllable of hers.) Fran plays the piano and sings, in both English and one of south Louisiana’s French Creole dialects. She represents a proud tradition of African-American blues-based female performers dating back to the classic 1920s recordings of Bessie Smith, the ‘30s work of Memphis Minnie, the 1940s – ‘50s masterpieces of Billie Holiday, Fran’s mid-century R&B contemporaries such as Ruth Brown, ‘60s singers including Irma Thomas, and on, through the decades, to the contemporary R&B star Beyoncé Knowles (who also has south Louisiana roots.) In addition Carol Fran’s influence extends beyond the African-American community in that she has influenced such popular R&B-influenced songwriters and performers as fellow Louisianans Marcia Ball and Lucinda Williams.

Fran grew up in the musically rich atmosphere of Lafayette, surrounded by basic blues, traditional jazz, the swing/jump-blues sound that would come to be called rhythm & blues, and the accordion-and-Creole-French interpretations of this music that would come to be called zydeco. As a teenager Fran made her professional debut with the Don Conway Orchestra, and then toured with jump-blues saxophonist Joe Lutcher, a native of Lake Charles, LA and the brother of the famed singer Nellie Lutcher. From 1953 to ’56 Fran performed in Juarez, Mexico, which, like many border towns, supported a lively nightclub scene. The ‘50s also found her playing the Gulf Coast “crawfish circuit” that included such storied Louisiana venues as the Dew Drop Inn in New Orleans, the Sugar Bowl in Thibodaux, and the White Eagle in Port Allen. On this circuit she crossed paths with such R&B greats as Earl King, Gatemouth Brown, Joe Tex, and Ernie K-Doe, among many others, and joined the band of Guitar Slim (Eddie Jones) of “The Things That I Used To Do” fame. When Jones died in 1959, Carol Fran led his band for a time.

This busy decade also found Carol Fran actively recording. In 1957 her poignant original composition, “Emmit Lee,” became a regional hit along the Gulf Coast. (Years later Emmitt Lee was retroactively cited as an example of “swamp pop,” although this term didn’t exist when Fran wrote and recorded her song.) Fran was accompanied on “Emmit Lee” by such esteemed south Louisiana musicians as Guitar Gable and drummer Clarence “Jockey” Etienne. The song was recorded by J.D. Miller at his studio in Crowley, Louisiana. Miller also crafted such notable hits as “Baby, Scratch My Back” – an unlikely national chart-topper during the height of The Beatles era – for the Baton Rouge blues artist Slim Harpo. Miller’s recordings were released by a Nashville-based label called Excello, creating the false impression that Slim Harpo, Carol Fran and other south Louisiana artists were Nashville-based as well.

While Emmitt Lee established Fran’s reputation she made little money from it, and this pattern continued as she recorded such other high-quality material as a cover version of “Crying In The Chapel.” Fran’s exquisite version came out in 1964 (the song had first been recorded in 1953) and seemed likely to score a hit for her — until Elvis Presley’s rendition was released in 1965 and garnered the lion’s share of attention. Other fine records by Fran came and went with little commercial success. Among connoisseurs of such music, however – both in this country, and in Europe and Japan – Carol Fran is regarded with the highest respect. As the noted British author and music researcher John Broven aptly observed, “Tragically, her enormous talent has never been widely recognized.”

With or without a record deal, Fran kept on performing in Louisiana and Texas. In 1983 she married the great blues guitarist Clarence Hollimon, known for his brilliant work on blues hits by Bobby Bland and other artists signed to the Houston-based company Duke Records. The two performed together and recorded three duo albums for the New Orleans-based Black Top label: Soul Sensation (1992), See There! (1994), and lt’s About Time (2000.) They also performed in Europe. When Hollimon died in 2000, Fran returned to Lafayette. She has continued to record sporadically and to perform as often possible, both around the United States and in Europe, Brazil, and Mexico. In 2008 her performance at the New Orleans Jazz & Heritage Festival was praised by USA Today as as “potent and poignant.”

Although her career languished at moments during the new millennium, Fran never gave up hope and bravely soldiered on. Upon reaching her seventies she deservedly attained the gravitas of a wise elder. Fran was profiled in a fine documentary film, Le Bleu Blues, produced for world-wide French-language broadcast by TV5 Québec Canada; since Fran is native speaker of Louisiana French, no subtitles were needed. And on September 25, 2013, at the Library of Congress in Washington, D.C., Fran received a prestigious National Heritage Fellowship, for lifetime achievement, from the National Endowment for the Arts’ Folk Arts Program.