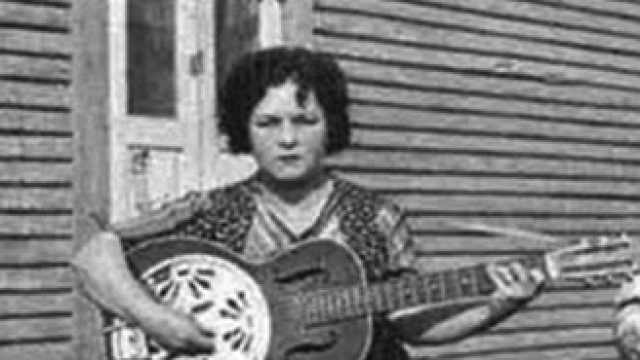 Guitarist and singer Cléoma Breaux Falcon (1905 – 1941) is a major historic and pioneering figure in the evolution of South Louisiana music. She accompanied her husband, accordionist Joe Falcon (pronounced fal-CAWHN), on the first Cajun-music record – a two-step entitled “Lafayette.” It was released in the 78 r.p.m. format by Columbia Records in 1928. (The B-side is “The Waltz That Carried Me To My Grave”) The popularity of this song – which is also known as “Allons a Lafayette” – opened the door for further commercial recording of Cajun and Creole music. Columbia and its competitors were solely focused on making money in the vernacular/ethnic music market. Cultural preservation, obviously, was never a consideration for them. Nevertheless these corporations did function as defacto documentarians. They captured a snapshot in musical time – the transitional period when an isolated, self-contained community began interacting with mass communication, as recently created by the ascendance of two synergistic new industries: records, and radio broadcasting.

The Falcons’ groundbreaking record came about through an odd set of circumstances. Joe Falcon had a manager – presumably unusual for the Cajun music scene of 1928 – named George Burr. Burr arranged an audition with Columbia, in New Orleans, by guaranteeing that, should the group be accepted, he would buy 250 records to sell in dancehalls in and around Crowley, in Acadia Parish. (At the time Crowley supported an active music scene, and later it became an important center for recording Cajun music, zydeco, blues, and R&B.) Burr drove the Falcons and a singer, Leon Meche, to the Columbia audition in New Orleans. As Falcon recalled years later “When [Burr] went to talk to them, they asked where the band was. Burr pointed to me and Cleoma and Meche.” Columbia’s A&R man (artists and repertoire) told Burr that the company was only interested in large orchestras that played foxtrots and similar dance tunes. Burr convinced them to record one tune by raising his promised purchase order to 500 copies. Then Meche was suddenly stricken with stage fright and refused to sing, so the Falcons recorded as a duo.

Cleoma Breaux Falcon was not credited, on the actual record label, for playing on “Allons A Lafayette.” But she received considerable attention when its success created a demand for live performances by her and Joe, plus Joe’s brother, Ulysses, on fiddle, and his daughters – Helen and Marie Solange, on guitar and washboard, respectively. The south Louisiana dance-hall circuit that they worked was connected by gravel roads where travel was limited to speeds of 35 miles an hour. The clubs had no electricity and were unbearably hot during summer. Fights broke out frequently, and bands often performed behind a chicken-wire screen to protect them from flying bottles. In this volatile environment, within a strict, traditional male-dominated culture, female performers were a rarity. This heightened the group’s drawing power among men, although some women were reportedly resentful – even more so, perhaps, because Cleoma Falcon known was a sharp dresser whose wardrobe reflected the latest national fashion trends. Atypically, the Falcons were able to make a living playing music alone, with no need for day jobs.

At this time, the role of women in Cajun music was relegated to the home, and a repertoire that primarily consisted of ballads, lullabies, and other a capella music not conceived for dancing. This mindset made it all the more remarkable when Columbia signed Cleoma Breaux Falcon to her own recording contract in 1929. In addition to the twenty-two songs she cut accompanying her husband, receiving co-billing on some, she recorded twenty-six songs under her own name. The material ran a wide gamut from an old French song (“Le Vieux Soulard Et Sa Femme”) to Cajun waltzes, one-steps. and two-steps; blues; country songs a la the Carter Family; and two numbers popularized by Fats Waller, the great Harlem stride pianist, songwriter, singer, and comedic entertainer. Falcon’s French-version of “Lulu’s Back In Town” was entitled “Lulu Revenue dans la Village,” while “It’s A Sin To Tell A Lie” appeared in French as “C’est Un Peche De Dire Une Mentrie.” In the 1930s, the Hackberry Ramblers similarly expanded the parameters of Cajun music with a wide variety of non-Cajun material. This including a Tin Pan Alley song entitled “One Sweet Letter” whose other interpreters included the vaudevillian comedic singer Sophie Tucker, a.k.a. “The Last of the Red Hot Mamas.” But in a significant indicator of the accelerated mainstream enculturation ushered in by records, radio, and the construction of new roads, the Hackberry Ramblers did not sing such material in French.

Besides recording solo and with her husband, performing frequently, and raising a daughter, Falcon also assisted her musical siblings. In 1929, Cleoma’s brother Amedée, a singer and accordionist, recorded a waltz entitled “Ma Blonde Est Partie,” accompanied by his brothers Ophy and Clifford. The Hackberry Ramblers re-recorded this song in 1936, under the title “Jolie Blonde” (“Pretty Blonde”), and it has come to be regarded as the unofficial “Cajun national anthem.” It is rumored, although not documented, that Cléoma Breaux Falcon wrote the song and taught it to her brothers. Breaux and his brothers recorded prolifically, including an early version of the Cajun classic that came to be known as “Poor Hobo,” and one of the first Cajun interpretations of New Orleans jazz, on a version of “Tiger Rag.”

Cleoma Breaux Falcon died in 1941 at age 35, cutting short a promising career for herself, Cajun music in general, and the role of women in Cajun music, in particular. Few females who performed in public – as opposed to those who sang ballads and the like, at home – would be heard again until the emergence of multi-instrumentalist and singer Ann Savoy and the singing accordionist Sheryl Cormier, both in the 1970s. At this writing, however, women have a significant presence in Cajun music. Beyond this aspect of Cleoma Breaux Falcon’s legacy, her musically active descendants include her nephew Johnnie Allan (Johnnie Allan Guillot), an acclaimed swamp-pop singer, and her great nephews – saxophonist Pat Breaux, and his brother Jimmy Breaux, an accordionist.