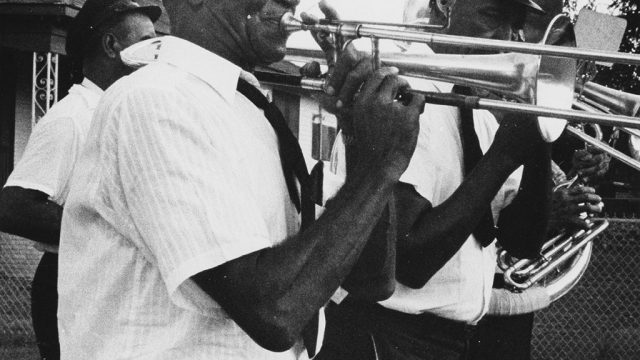 Born in the Tremé neighborhood of New Orleans, trombonist Albert Warner (1890-1966) worked primarily with brass bands, although he worked with dance bands in the early part of his musical career. Warner began playing trombone in the early 1910s, starting with lessons from his half-brother Ulysses Jackson and Honore Dutrey. His first professional experience was with the Bull’s Band, and over the course of the 1920s and 30s he worked with “Big Eye” Louis Nelson Dellile, Kid Rena, Buddie Petit, Chris Kelly, and Wooden Joe Nicholas. In 1932 he joined the Eureka Brass Band and remained with them until his death some three decades later. Warner’s earliest recordings were with Bunk Johnson (1942) and George Lewis (1943) and he recorded frequently with the Eureka, beginning in 1951, as well as with Charlie Love, Peter Bocage, and Kid Sheik Colar. In the 1960s he could often be found with bands performing at Preservation Hall.