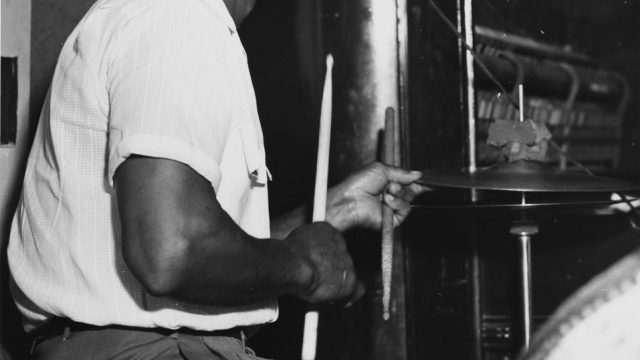 Drummer Albert Jiles Jr. (1905-1964) was born in Thibodaux, Louisiana, in Lafourche parish, and had a father, Albert Jiles Sr., and four uncles who were drummers, all but the father being active in New Orleans brass bands such as the Excelsior and the Onward. Albert Jr. moved to New Orleans in 1921and was professionally active within a year, after taking instruction on snare drum from Paul Chaligny at the behest of his uncle Clay Jiles. His first band was with trumpeter Lawrence “Toca” Martin, which led to jobs with Chris Kelly Kid Rena, and Buddie Petit. During the Depression he played with Kid Howard’s band. In 1941 Jiles joined Celestin’s Tuxedo Jazz Band and in 1945 he was with the clarinetist Albert Burbank, during which time the band was recorded by Bill Russell’s American Music label. Jiles recorded for American Music again with Wooden Joe Nicholas in 1949 and a decade later recorded as a co-leader with the Love-Jiles Ragtime Orchestra.