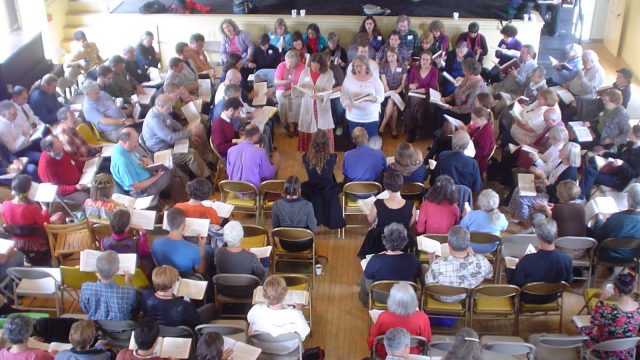 The a capella genre known as shape-note singing, primarily heard in renditions of Christian religious material, employs four-part harmony. Each of the four parts is assigned to a group of people, the size of which may vary, as opposed to four-part harmony as sung by quartets, wherein there is only one voice per part. This distinction is important because quartet singing per se is a significant tradition in Christian religious music and because African-American quartet singing contributed significantly to the emergence of rhythm & blues.

The term shape-note refers to a minimalist form of musical notation that is simpler than the standardized form. It was devised in the early nineteenth century when large segments of the American populace were illiterate. The shape note system is typically based on a four-note scale, as opposed to the conventional seven-note increments of do-re-mi-fa-so-la-ti. For further simplification and to make the system more accessible to people with little or no reading skills, each note of the four notes is depicted with its own distinct shape – a triangle, circle, square, and diamond. In conventional notation, there is no such shape differentiation. Some shape-note groups employ a system of seven shapes, however, these do not correspond to standardized notation.

It is generally accepted that shape-notes were first published in 1803 in The Musical Primer by Andrew Law, a minister and music teacher from Boston, Massachusetts. Shape note singing has strong connections with British music – both folk-rooted and formally composed, and in terms of style and repertoire. It was first disseminated by itinerant “singing masters” who worked a circuit of small towns, teaching for a period of one or two weeks and then going to another location. This practice began in New England and expanded both westward and southward as the nineteenth century progressed. Shape-note singing interacted significantly with America’s Second Great Awakening, a pervasive fundamentalist Protestant resurgence that took place circa 1790 – 1840. Shape-note singing has a loyal core following in the south. In Louisiana, it is more apt to be heard in the northern parishes where other aspects of rural Anglo-American culture prevail, as opposed to south Louisiana where French and Catholic roots are prevalent. Shape-note singing is also heard within the African-American community, particularly in northeast Louisiana’s Delta region. The shape-note tradition lives on both at church services and at gatherings known as “singings.” There are echoes of shape-note aesthetics in secular country music as heard in Louisiana in the work of such close-harmony singers as the Whitstein Brothers from Pineville and from the Bailes Brothers, who performed on the Louisiana Hayride, a nationally influential radio program broadcast from Shreveport, Louisiana. Shape-note singing, as one aspect of fundamentalist gospel music, influenced such gospel-tinged musicians as rockabilly pioneer Jerry Lee Lewis.

When shape-note singing became popular in the nineteenth century, it was met with some disdain within the well-educated world of classical music. This perception of shape-note singing as typifying the semi-literate lower-class masses was exemplified by the following quotation in the Cincinnati-based The Musician and Intelligencer magazine in 1848: “The most mortifying feature and grand cause of the low estate of scientific music among us, is the presence of the common Yankee singing schools, so called. We of course can have no allusion to the educated professors of vocal music, from New England, but to the genuine Yankee singing masters, who profess to make an accomplished amateur in one month, and a regular professor of music (not in seven years, but) in one quarter… Hundreds of country idlers, too lazy or stupid for farmers or mechanics, ‘go to singing school for a spell,’ get diplomas from others scarcely better qualified than themselves, and then with their brethren, the far famed ‘Yankee peddlars,’ itinerate to all parts of the land, to corrupt the taste and pervert the judgment of the unfortunate people who, for want of better, have to put up with them.” In retrospect, however, some observers of the era were more tolerant: “Yet the simple strains of those days were as perfectly adapted to those who made them as Wagner, Liszt, Mendelssohn, and Chopin are to us today.”

Unlike many forms of traditional music, shape-note singing was not disseminated solely by oral tradition. Important shape-note hymnals include The Southern Harmony and Musical Companion: Containing A Choice Collection of Tunes, Hymns, Psalms, Odes, and Anthems: Selected From The Most Prominent Authors In The United States: Together With Nearly One Hundred New Tunes, Which Have Never Before Been Published, which appeared in 1845. Another popular work, printed in several varying versions, was The Original Sacred Harp. Its influence is revealed by the fact that “sacred harp” has become a synonymous term for shape-note singing.