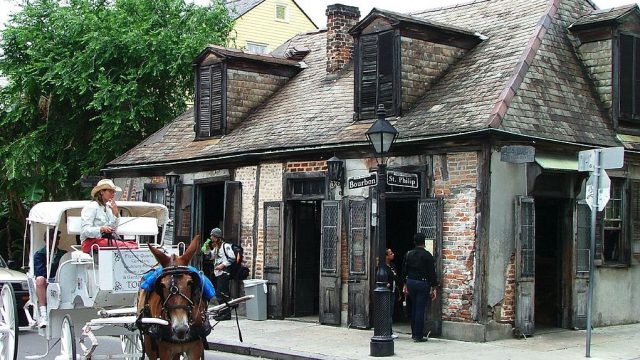 Lafitte’s Blacksmith Shop is a site in the French Quarter of New Orleans, Louisiana.

Lafitte’s Blacksmith Shop is a tavern located on the corner of Bourbon Street and St. Philip Street. The tavern’s building, built sometime before 1772, is one of the older surviving structures in New Orleans (the Ursuline Convent, for example, is older) and has been called the oldest continually occupied bar in the United States. According to legend the pirate Jean Lafitte (ca. 1776 – ca. 1823) once owned the building, though as with many things involving Lafitte, such as it being a place where he plotted his illegal seizures and the sale of contraband, no documentation of this exists.

Lafitte’s Blacksmith Shop has a reputation as a great game-day bar for college and pro sporting events, as well as being a popular bar break for many New Orleans Tour companies, a hangout for vampires and a variety of other sub-cultures. It is purported to be one of the more haunted bars in the French Quarter.

It was declared a National Historic Landmark in 1970.