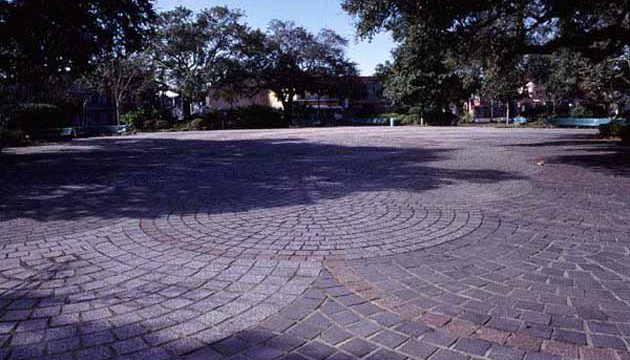 In Louisiana’s French and Spanish colonial era of the 18th century, slaves were permitted to gather and sell goods every Sunday in a grassy field on the outskirts of the French Quarter that later became known as Congo Square. There, they played music and danced in the form of a ring shout, with small groups of instrumentalists, singers, and dancers arranging themselves into a circle surrounding a rotating cast of dancers. Because this tradition was allowed to continue until the 1840s, after the city became part of the United States, historians and musicologists have pointed to the Congo Square dances as crucial to the establishment of Africanized cultural traditions in New Orleans.

Musicologist Samuel Floyd locates “all of the defining elements of black music” in the ring shout, including “call-and-response devices; additive rhythms and polyrythms; timbral distortions of various kinds; musical individuality within collectivity; and the metronomic foundational pulse that underlies all Afro-American music” (1991, 267-268). The most detailed account of Congo Square, from an 1819 journal entry by architect Benjamin Henry Latrobe, makes reference to several of these characteristics. The many drummers, whose sound Latrobe compared to “horses trampling on a wooden floor” (1819, 203), were likely creating the complex polyrhythms that characterize ritual drumming in West Africa and the Americas. While one group of women was “respond[ing] to the Song of their leader” in call-and-response fashion, others were “walk[ing], by way of dancing, round the music in the Center,” creating what Floyd would recognize as “an activity in which music and dance commingled, merged, and fused to become a single distinctive cultural ritual” (1991, 266).

The slave dances in Congo Square provided a formidable basis for the development of the city as an epicenter of African American music, while also communicating to the fascinated crowds on the square’s perimeter. The only accounts of the dances were written by white spectators, and the most popular image associated with the dances, the drawing by E.W. Kemble, was illustrated in 1868, long after the dances ended, by someone who had never attended. Congo Square is then not only an important site for African cultural retentions and the future of American music, is also teaches us about race relations and myth making through music.