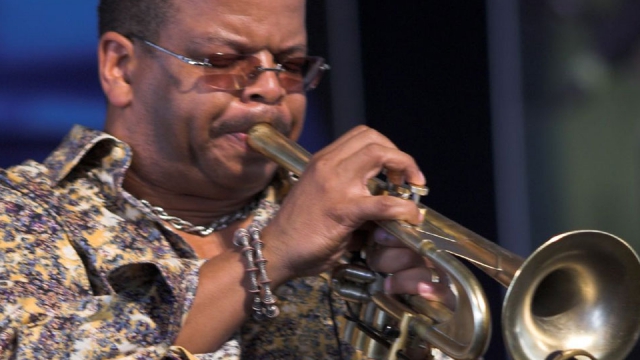 Terence Blanchard (born March 13, 1962 in New Orleans, LA.) is an accomplished trumpeter, composer, film scorer, and band leader. His start as a sideman for Lionel Hampton and Art Blakey’s Jazz Messengers led to co-leading his own band with Donald Harrison Jr. and a highly regarded solo career marked by great theme records, extended suites, and excellent sidemen. Blanchard has also had an extensive career scoring films including many Spike Lee films. He also has been heavily involved in jazz education across the nation, and has won several Grammy awards.

Blanchard was born in New Orleans, LA on March 13, 1962. He started playing piano at age 5 and moved to trumpet when he was 8. In high school he attended the well-regarded New Orleans Academy for the Creative Arts (NOCCA) and studied with Ellis Marsalis. After 2 years at Rutgers University and several tours with Lionel Hampton, he took Wynton Marsalis’ spot in Art Blakey and the Jazz Messengers, a band famous for both its long legacy of stellar players and the way that Blakey would mentor the band members toward being bandleaders themselves. He served as Blakey’s musical director until 1986. In 1984, Blanchard received his first Grammy Award for Best Jazz Instrumental Performance – Group for the Jazz Messengers album “New York Scene.” He and fellow Jazz Messenger/New Orleanian Donald Harrison Jr. left Blakey in 1986 and started their own group that recorded 4 fine records in the mid and late1980s as well as tributes to Booker Little/Eric Dolphy that recorded the seminal records “Live At the 5 Spot.”

Blanchard began his solo career in 1991 with Columbia Records. His first two records were fine examples of his technique playing mostly standards. His music took an upward leap in conception and execution with his adaption of his music for Spike Lee’s Malcolm X biography, “The Malcolm X Jazz Suite.” This exhibited his compositions and ensemble playing in a work of great depth, emotion, and virtuosity that is one of the best jazz records of the last 25 years. Since then, Blanchard has maintained this high level of work as he has alternated between concept records (1994’s “The Billie Holiday Songbook,” 1999’s record of film themes “Jazz in Film,” and 2001’s “Let’s Get Lost: The Songs of Jimmy McHugh”) and albums marked by his own compositions and excellent playing such as 2000’s “Wandering Moon,” 2005’s “Flow,” and 2009’s “Choices.” After Hurricane Katrina and the failure of the federal levees led to his childhood home being inundated with 8 feet of water, (the return to which with his mother is one of the most emotional scene’s in Spike Lee’s documentary “When The Levee’s Broke.”), Blanchard wrote and recorded a suite of songs “A Tale of God’s Will (A Requiem for Katrina) that was universally acclaimed for its coherence, musicianship, and emotion. He toured this record around the United States, often playing with a symphony orchestra. It won a Grammy Award in 2007 for Best Large Jazz Ensemble Album. His playing is marked by virtuoso technique and an ability to move easily from high to low notes and a great tendency to smear the sound of moving from note to note.

Blanchard has also won Grammy Awards for his work on other musicians’ records. He won a Grammy in 2008 for Best Jazz Instrumental Solo for “Live at the 2007 Monterey Jazz Festival” and the same award in 2009 for his solo on drummer Jeff “Tain” Watts’ song “Dancin’ 4 Chicken” on the album “WATTS.”

Blanchard also started his film career in 1990 by playing trumpet for Spike Lee’s portrayal of jazzmen “Mo Better Blues.” Blanchard has continued to work with Lee as a film composer, writing the music for most of his films including “Malcolm X,” “Jungle Fever,” “Crooklyn,” “Clockers,” “Summer of Sam,” “Bamboozled,” and “25th Hour.” His work for “25th Hour” was nominated for Sierra Award, a Golden Globe, and a World Soundtrack Award. He has also composed scores for “Eve’s Bayou,” “Talk To Me,” “Cadillac Records,” and “Red Tails.” More recently, he has been scoring and composing for stage work, doing the music for the Broadway play “Motherf*#@^! With a Hat” and a 2012 revival of “A Streetcar Named Desire.” In 2013 his original opera “Champion, an Opera In Jazz,” based on the life of boxer Emile Griffith, opened in St. Louis.

Blanchard has also been very active in jazz education and has had several artistic and academic residencies and commissions He was named the Artistic Director of Jazz for the Thelonious Monk Institute of Jazz at the University of Southern California in 2000. in 2007 he was one of the main forces in relocating the Monk Institute to Loyola University in New Orleans for 4 years. Having the Monk Institute in New Orleans was a great benefit to the city in a difficult time period. He was the 2007 Artist-in-Residence at the Monterey Jazz Festival, and was commissioned by the Louisiana Philharmonic Orchestra and New Orleans Jazz and Heritage Foundation to compose the “Concierto for Roger Dickerson” in 2011. Currently he serves as the Artistic Director of Jazz at the Henry Mancini Institute at University of Miami Frost School of Music, Resident Artistic Director at SFJazz Center, and Fred A. and Barbara M. Erb Jazz Creative Chair for the Detroil Symphony Orchestra.

David Kunian is a music writer and DJ living in New Orleans.