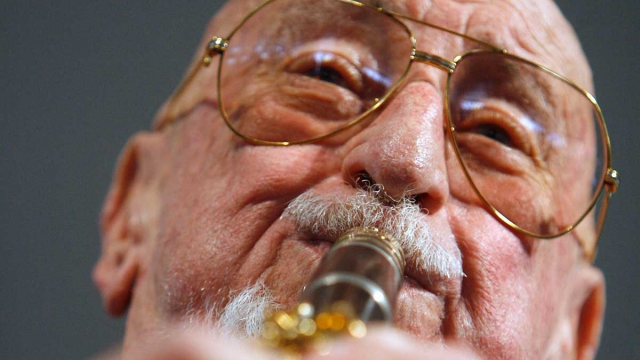 Pete Fountain is a clarinetist and bandleader from New Orleans, Louisiana. He is widely known for his fluid, ear-pleasing musical style as well as his engaging personality and showmanship. He plays in a variety of music genres, principally traditional jazz. In the late 1960s and 1970s, Fountain was arguably New Orleans’ most well-known and popular musical ambassador, receiving numerous local honors and performing on The Tonight Show fifty-eight (58!) times, further solidifying his fame.

Fountain’s birth name was Pierre Dewey LaFontaine, Jr. Born and raised in New Orleans’ Mid-City district, he began playing the clarinet as a young boy after he was taken to a doctor for treatment for his weak, infection-prone lungs. The doctor advised his parents that the boy’s lungs could be strengthened if he blew into a musical instrument. The seemingly unorthodox treatment strategy worked: not only did young Fountain’s lung health improve, but he gradually became a skilled clarinet player. Years later, Fountain reflected that this musical beginning could only have happened in New Orleans.

Fountain’s two early musical heroes were Irving Fazola, a New Orleans clarinetist whose mellow sound had a profound influence on Fountain, and renowned bandleader Benny Goodman. He acquired a large part of his playing ability through listening to recordings of Fazola and Goodman and playing along. He performed in a number of bands in New Orleans as a teenager, including trumpeter Al Hirt’s band. Fountain and Hirt would become lifelong friendly rivals and friends, both later owning clubs in New Orleans’ French Quarter.

At age 20, Fountain co-founded The Basin Street Six, a Dixieland band whose members included trumpeter George Girard, pianist Roy Zimmerman, trombonist Joe Rotis and drummer Charlie Duke. The band was successful and several of its members went on to enjoy long careers and fame. During its four-year existence, the Basic Street Six recorded for a number of record labels as its members developed into seasoned professionals.

In 1951, Fountain married Beverly Lang. They had three children, Dahra, Kevin and Jeffrey, and have been together now for well over 60 years.

Following the breakup of the Basin Street Six, Fountain played with the Dukes of Dixieland before being offered a job, in 1957, with Lawrence Welk’s orchestra. Two years prior, the show had begun to be syndicated nationally after a successful four-year run in Los Angeles, and it was here that Fountain’s reputation and fame began to reach a national audience. He left the show in 1959, thankful for the experience but desiring to return to straight jazz rather than Welk’s audience-friendly popular-music blend. His feelings at the time were summarized by his comment, “I guess I’m just a saloon player at heart.”

His tenure with Welk also affected Fountain in another important way: through observing Welk’s strict-but-fair leadership, he had learned how to run a band. Back home in New Orleans in 1959, Fountain had no trouble forming his own ensemble, The Pete Fountain Quintett, and getting steady gigs at venues like The Bateau Lounge. In 1960 Fountain opened a Bourbon Street nightclub of his own, The French Quarter Inn, which would become a successful venue throughout the 1960s and ’70s. His club band included pianist John Probst, vibraphonist Godfrey Hirsh, guitarist Paul Guma, drummer Jack Sperling, and bassist Oliver Felix.

The club was a major draw not only for patrons but for famous musicians and celebrities. Singing star Brenda Lee performed with Fountain’s band (and the two later recorded an album together, 1968’s For the First Time). Fountain’s hero Benny Goodman visited on multiple occasions, and entertainment icons such as Frank Sinatra, Robert Mitchum, Carol Lawrence and Jonathan Winters all made the pilgrimage to the club.

Throughout their lives, Fountain and Al Hirt maintained their musical friendship, recording together and trading sets in their respective venues. Local musicians often played in both clubs, as band memberships revolved and evolved.

Fountain’s nightclub at the New Orleans Hilton opened in 1977, beginning a 26-year run that would only end with Fountain’s semi-retirement in 2003. During these years Fountain’s reputation as a jazz clarinetist and entertainer of the first order remained intact, and his club became a mecca for visitors to New Orleans.

In the mid-1970s Fountain was a founding member of The Half-Fast Walking Club, a Mardi Gras parading organization, or krewe, that set out on foot each Mardi Gras day for more than 30 years. (The original name, The Half-Assed Walking Club, was changed to strike a more family-friendly tone.)

When Pope John Paul II visited New Orleans in 1987, Fountain performed at the Papal Mass and was complimented enthusiastically by the pontiff.

In 2005 Fountain’s home in Bay St. Louis, Mississippi, was destroyed by Hurricane Katrina, which made landfall just a few miles away. Fountain had been playing twice-weekly shows at a nearby casino since 2003. Several years later, Fountain was a d