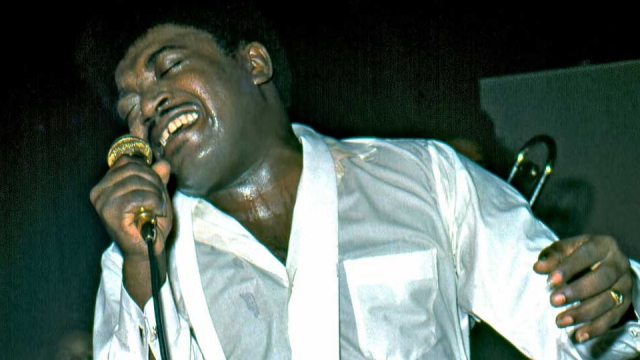 Percy Sledge (born 1940; Leighton, Alabama) is a rhythm and blues singer with a plaintive, gospel-fueled voice, who is best known for his #1 hit, “When A Man Loves A Woman” (1966). This iconic song was certified gold on both the R&B and Pop charts in the US and it was a hit twice in the UK. Due to Sledge’s lack of understanding of the music, the songwriting credit went to organist Andrew Wright and bassist Cameron Lewis, both of whom helped with chords and arrangement. Yet Sledge quickly recorded several hits for Atlantic Records, including “It Tears Me Up” and “Warm and Tender Love,” and returned to the top of the charts two years later through the bitter anguish conveyed in “Take Time to Know Her” (#6 R&B, #11 Pop).

Sledge was a construction worker and hospital orderly who first performed with the Esquires, an R&B band that played all over Alabama. Sledge’s voice was more in line with the rough-hewn country soul of Wilson Pickett and James Brown, but on the bandstand he tended to copy the smooth stylings of Sam Cooke and The Platters. Sledge enjoyed singing ballads and reveled in how he could calm the audience down with a lovelorn number. He said the melody for his biggest hit was swimming around in his head for years. “I hummed it all my life, even I was picking and chopping cotton in the fields (as a kid).”

At a fraternity party at the University of Mississippi in the mid-1960s, Sledge improvised some lyrics to the melody in his head and first called the song, “Why Did You Leave Me, Baby?” Sledge later claimed his then-girlfriend had just left him for another man. Quin Ivy, a student at that party, became enthralled with the song and asked Sledge if he could record it. Sledge met Ivy and his partner Marlin Greene at their tiny studio in Sheffield, Alabama. The session produced a series of soul ballads, including “When A Man Loves A Woman,” in which Sledge communicated the feeling of a broken heart through the upper octaves of his range – a masculine, pain-filled cry.

Sledge toured throughout the world and built a strong international following around his late-60s soul ballads. In 1974, he had a hit with “I’ll Be Your Everything,” a song that sold especially well in South Africa and Europe. “When A Man Loves A Woman” was re-issued in Britain in 1987 and reached #2 on the UK charts. Along with Michael Bolton’s cover of this song — which won a Grammy Award in 1991 – Sledge’s career was reignited and he returned to the limelight.

After a 20-year recording hiatus, Sledge returned to the studio in 1994 to deliver Blue Night, which featured Steve Cropper, Bobby Womack and Mick Taylor. The recording received the W.C. Handy Award for Best Soul or Blues Album and the Blues Music Award for Best Soul/Blues Album; it was also nominated for a Grammy. Sledge went on touring and did not go back into the studio for another ten years, then recorded Shining Through the Rain in 2004.

Sledge was inducted into the Rock and Rock Hall of Fame in 2005 and received one of the inaugural Rhythm and Blues Foundation Pioneer awards in 1989. He was named to the Louisiana Music Hall of Fame in 2007 and into the Delta Music Museum in Ferriday, Louisiana. He continues to tour across the United States and Europe, nearly 50 years after “When A Man Loves A Woman” rose to the top of the charts.

Karen Celestan was the senior program manager for the Music Rising at Tulane initiative (2012-2014). She is the co-author of three books Unfinished Blues: Memories of a New Orleans Music Man with Harold Battiste, Jr.; Freedom’s Dance: Social, Aid and Pleasure Clubs in New Orleans with Eric Waters; and So. So Pretty: Mardi Gras Indian Queens in New Orleans with Cherice Harrison-Nelson.