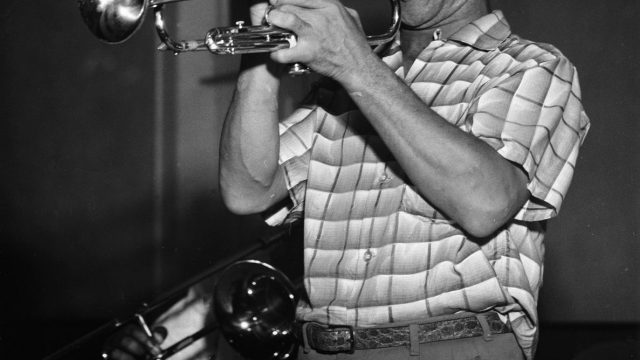 Ernie Joseph “Little Cag” Cagnolatti (1911-1983) was an Afro-Italian Creole jazz trumpeter from Mandeville, Louisiana. His older brother, drummer Klebert Cagnolatti, brought him to New Orleans around 1920 to learn drums, but Ernie switched to trumpet around 1928, when he was affiliated with Mother Catherine Seals’ Temple of Innocent Blood religious sect. Cagnolatti’s career covered the full spectrum of jazz in New Orleans, from performing as the Archangel Gabriel (with trumpet, elevated on a wire) for Mother Catherine Seals, to big band work with Herbert Leary and Sidney Desvignes in the 1930s, traditional jazz bands with Oscar Celestin and Paul Barbarin in the 1940s, and long-term affiliations with the Henry Allen, Eureka, Young Tuxedo, George Williams, and Onward brass bands. From 1961 through the 1970s he was featured at Preservation Hall, despite the amputation of his left leg in 1969.