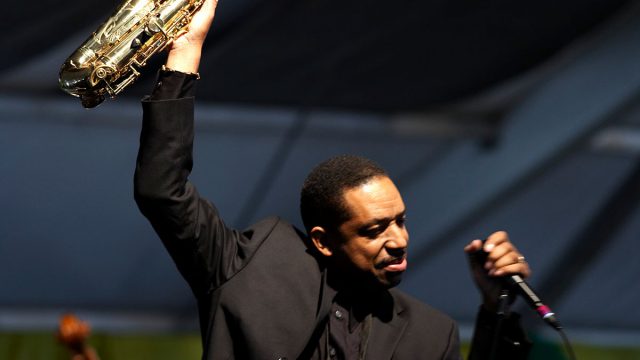 Harrison studied at the Southern University and Berklee College of Music. He played with Roy Haynes, Jack McDuff, Art Blakey’s Jazz Messengers, Terence Blanchard and Don Pullen in the 1980s. He also played with the re-formed Headhunters band in the 1990s. In 1991 he recorded “Indian Blues,” which captured the sound and culture of Congo Square in a jazz context. In 1994 Harrison created the “Nouveau Swing” style of jazz, which merges the swing beat with many of today’s popular dance styles of music, as well as styles that are prominent from his cultural experiences in his hometown.

Harrison also performs in the smooth jazz genre. His group Donald Harrison Electric Band has recorded popular radio hits and have charted in the top ten of Billboard magazine. He performs as a producer, singer and rapper in the traditional Afro-New Orleans culture and hiphop genres with his group, The New Sounds of Mardi Gras. The group, which has two recorded two cds, was started four years ago and has made appearances worldwide. Harrison is the Big Chief of the Congo Nation Afro-New Orleans Cultural Group which keeps alive the secret traditions of Congo Square.

As of 2007, Harrison is working on a large orchestral work which investigates what it is like to be a participant in New Orleans culture. Harrison was forced to evacuate New Orleans after Hurricane Katrina, and proceeds from his album Nouveau Swing will go to victims of the hurricanes.

Harrison has nurtured a number of young musicians including the young Grammy-nominated trumpeter Christian Scott (Harrison’s nephew), as well as Mark Whitfield, Cyrus Chestnut, Christian McBride, and The Notorious B.I.G. Harrison was featured in Spike Lee’s HBO documentary, When the Levees Broke, and has appeared as himself in nine episodes of HBO’s Treme.