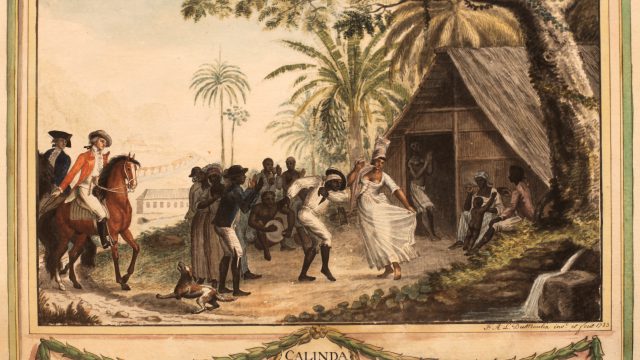 The Calinda was a voodoo dance brought to Louisiana from San Domingo and the Antilles by slaves.

Calinda (Kalinda) is a martial art, as well as kind of folk music and dance in the Caribbean which arose in the 1720s. Calinda is the French spelling, and the Spanish equivalent is calenda; it is a kind of stick-fighting commonly seen practiced during Carnival in Trinidad and Tobago. There, Carnival songs are considered to be derived from calinda chants and “lavways.”

Though it is more commonly practiced as a dance because of the violent outcome of stick fighting, its roots are still that of a martial art originating from Africa, and stick fights still occur in Trinidad. They also have been formalised into annual Carnival competitions.

Kalenda is one name assigned to an Afro-Caribbean form of stick fighting as practiced in Haiti and entering the United States through the port city of New Orleans. It is also practiced in other parts of the Caribbean, such as Martinique.

The well-known Cajun song “Allons dancer Colinda” is about a Cajun boy asking a girl named Colinda to do a risqué dance with him; probably derived from the Calinda dance which was reported to have been performed in New Orleans by Afro-Caribbean slaves brought to Louisiana.

Considered indecent by the respectable portion of the population, it was officially banned throughout the State in 1843, but continued to be performed for many years afterward.

An early version of the Calinda was danced only by men, stripped to the waist and brandishing sticks in a mock fight while at the same time balancing upon their heads bottles of water. As soon as a dancer spilled a drop of his water he was banished from the field. Later the Calinda degenerated into a thoroughly lascivious performance.