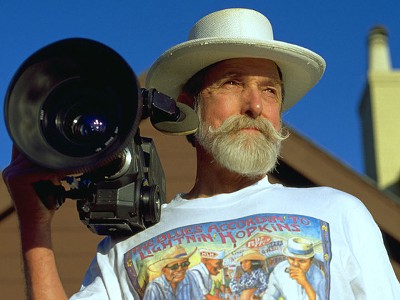 Les Blank is a prize-winning independent filmmaker, best known for a series of poetic films that led Time Magazine critic Jay Cocks to write, “I can’t believe that anyone interested in movies or America…could watch Blank’s work without feeling they’d been granted a casual, soft-spoken revelation.” John Rockwell, writing in The New York Times, adds, “Blank is a documentarian of folk cultures who transforms anthropology into art.” And Vincent Canby, also in The Times, declared that Blank “is a master of movies about the American idiom… one of our most original filmmakers.”

Born in 1935 in Tampa, Florida, Les Blank attended Tulane University in New Orleans, where he received a B.A. in English literature and an M.F.A. in theatre. In 1967, after two years in the Ph.D. film program at the University of Southern California, and five years of freelancing in Los Angeles, he began his first independent films, on Texas blues singer Lightnin’ Hopkins (The Blues Accordin’ to Lightnin’ Hopkins) and the newly forming sub-culture known as flower children. (God Respects Us When We Work, But Loves Us When We Dance.) To finance these and other of his own films, he continued to make industrial and promotional films for such organizations as Holly Farms Poultry, Archway Cookies and the National Wildlife Federation until 1972.

Blank’s first independent films began a series of intimate glimpses into the lives and music of passionate people who live at the periphery of American society– a series that grew to include rural Louisiana French musicians and cooks (Yum, Yum, Yum!; J’aiEte Au Bal — I Went to the Dance; Dry Wood; Hot Pepper; Spend It All; and Marc and Ann); Mexican-Americans (Chulas Fronteras; Del Mero Corazon); New Orleans music and Mardi Gras (Always For Pleasure); chef Alice Waters and other San Francisco Bay Area garlic fanatics (Garlic Is As Good As Ten Mothers); German filmmaker Werner Herzog (Burden Of Dreams; Werner Herzog Eats His Shoe) and the very unique and inspiring multi-faceted Artiste, Gerald Gaxiola (The Maestro: King of the Cowboy Artists); Appalachian fiddlers (Sprout Wings and Fly); Polish-American polka dancers (In Heaven There Is No Beer?); rock musicians (Huey Lewis and the News: Be-FORE!; RyCooder and the Moula Banda Rhythm Aces; and A Poem Is a Naked Person, on Leon Russell); Serbian-American music and religion (Ziveli!: Medicine for the Heart); Hawaiian music and family traditions (Puamana); Afro-Cuban drumming and religious tradition (Sworn to the Drum); more East Texas bluesmen (A Well Spent Life), featuring Mance Lipscomb, and Cigarette Blues with Sonny Rhodes; American tourists in Europe (Innocents Abroad) and even gap-toothed women (Gap-Toothed Women. His latest work, All In This Tea, follows tea specialist David Lee Hoffman to China in search of the perfect leaf.

Major retrospectives of Les Blank’s films have been mounted in Los Angeles at FILMEX in 1977; the Walker Art Center in Minneapolis in 1978 and 1984; New York’s Museum of Modern Art in 1979; the National Film Theatre, London, 1982; Cineteca Nacional, Mexico City, 1984; the Cinematheque Francais, Paris, 1986; the Independent Film Week, Augsburg,Germany, 1990 and the Leipzig Film Festival, 1995 and the Sofia Music Film Festival, Bulgaria, 1998. Feature articles on Blank have appeared in American Film, Film Quarterly, Take One, The New York Times, The Los Angeles Times, Image Magazine, Mother Jones, The Village Voice, Rolling Stone, Premiere, Downbeat and Video Review. In 1984 Blank co-edited the Burden of Dreams book, which included journals written during the making of Burden of Dreams by him, sound recordist-editor Maureen Gosling and Werner Herzog, plus an article by legendary journalist Michael Goodwin. In 1986, National Public Radio aired a half-hour special on Les Blank’s work and in 1991 CNN aired a special on him worldwide. In 2007, a 30-minute interview with Nick Spitzer on nationwide NPR. 2008, Film Forum, New York 2008 presented a complete retrospective in 16mm.

In 1989-1990 Blank was the distinguished filmmaker-in-residence at San Diego State University and in 1991, adjunct assistant professor in film at the University of California, Berkeley.

He was also the Louis B. Mayer filmmaker-in-residence at Dartmouth College and a directing fellow at the Sundance Institute in Utah (both in 1984).

Between 1973 and 1994 Blank toured extensively with the sponsorship of the United States Information Agency, screening his films and discussing them with audiences throughout Latin America, China, England, Spain, Germany, Italy, the former Yugoslavia, Bulgaria and Egypt.

In 1993 Garlic Is As Good As Good Mothers, and in 2004 Chulas Fronteras were selected by the U.S. Library Of Congress for inclusion in The National Film Registry. Les joins Fred Wiseman and the Maysles brothers as the only documentatians to be honored with two films on the list.

*Les Blank is a member of:*